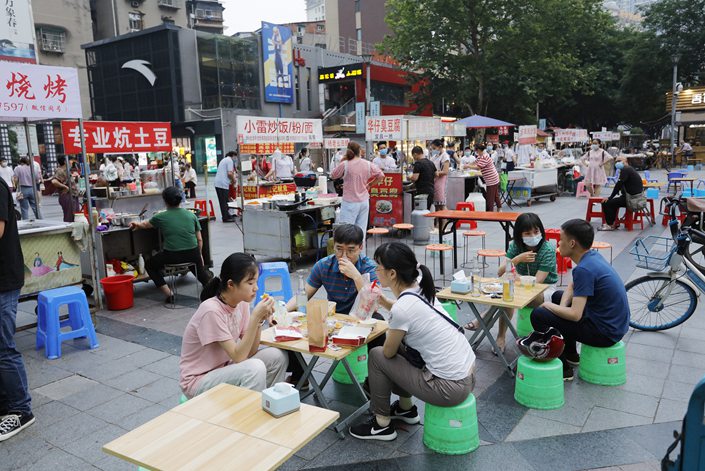 Waves of government crackdowns, often in the name of better food safety, urban beautification, or reducing pollution from outdoor grills, have forced many vendors into the suburbs or out of the market completely.

“The street-stall and small-store economy is an important source of employment and human culinary culture — it’s part of China’s livelihood just as much as larger, high-end businesses,” Li told small business owners during a Monday inspection of the eastern city of Yantai, according to state media. “The country will only get better once markets, enterprises and individual traders get back on their feet and develop. We will give you our support.”

The premier’s remarks followed similar comments he made last week which have revived hopes that street sellers, a group long targeted by official campaigns, may soon be allowed to return to the country’s major cities.

China is trying to breathe life back into a national economy reeling from the impact of the deadly Covid-19 outbreak. The government has ditched its growth target for 2020 in order to give more targeted support for millions of struggling small and midsized businesses and bring down spiraling unemployment figures.

Officials have indicated that those efforts may include rehabilitating parts of the informal economy that have historically had tense relationships with the authorities, such as roadside food stalls. At a press conference on the sidelines of key political meetings last week, Li praised the southwestern city of Chengdu for reportedly creating 100,000 jobs overnight by setting up some 36,000 vending berths, according to the local Sichuan Daily newspaper.

Until a few years ago, many Chinese city centers buzzed with street sellers serving up steaming portions of fried rice, noodles, and other snacks. But waves of government crackdowns, often in the name of better food safety, urban beautification, or reducing pollution from outdoor grills, have forced many vendors into the suburbs or out of the market completely.

Beijing, for instance, purged vast numbers of stalls and other gray-area businesses from historic “hutong” neighborhoods. Officials said the move was part of efforts to clamp down on illegal structures and make the capital look more attractive.

Similarly, urban management officials in the eastern megacity of Shanghai booted out many mobile street vendors found to be operating without food licenses.

Although supporters claim the shutdowns improve the cities’ image and enhance public safety, opponents have criticized them for disproportionately targeting low-income residents and depriving cities of local color.