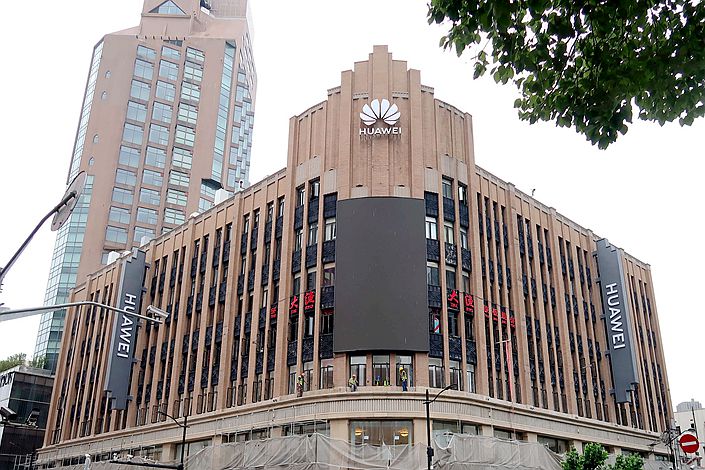 Huawei's flagship store in Shanghai on May 29.

Huawei Technologies Co. Ltd. has long been stocking up on custom-made chips as a hedge against U.S. sanctions, and should have enough to last at least until the end of the year. But its impressive supplies could quickly become outdated amid the escalating 5G technological arms race.

The company faces enormous uncertainty after it uses up these reserves, analysts told Caixin. Even if the company can find third-party replacements, such products are likely to be inferior to the ones it designs and contracts other companies to make.

Huawei’s stockpiling strategy isn’t widely used in the fast-moving technology sector where the latest gadgets can be out of date within months. For example, mass production of cutting-edge 5-nanometer chip technology that will be key to 5G smartphones is not expected to start until the end of the year.

On May 15, the U.S. Department of Commerce announced that it would expand a decision one year earlier to blacklist Huawei which banned U.S. suppliers from trading with the company unless they sought permission from Washington. The rule was expanded to not only cover Huawei’s U.S. suppliers and other business partners, but any of Huawei’s foreign chip-making partners whose production lines include U.S.-made equipment.

It was a shock to many, but not to Huawei, which watched as Chinese peer ZTE Corp. was sanctioned by the U.S under similar circumstances in 2018.

Last year, Huawei’s pile of chips and other components was worth 167.4 billion yuan ($23.5 billion), up 73.4% from the previous year, Rotating Chairman Guo Ping told analysts at a company conference early last month. Company revenue grew just 19.1% over the same period.

End of the year

Under the new rules, custom chip orders placed before May 15 can still be delivered to Huawei within a 120-day grace period. After that they must cease.

Huawei designs its own chips through its HiSilicon unit, which launched several chipsets last year as replacements for those of U.S. peers like Qualcomm in its smartphones and 5G gear.

But the unit is vulnerable to the fresh sanctions, which analysts say were intended to target manufacturers such as Taiwan Semiconductor Manufacturing Co. (TSMC), a contract chipmaking giant which uses U.S.-made equipment to produce nearly all of Huawei’s self-designed chips.

Analysts said Huawei had anticipated tightening U.S. restrictions and placed additional orders from its partners, and those will meet its needs until the end of this year. But while the company will be able to buy non-customized chips from third-party suppliers, using these may reduce the performance of their products.

Huawei’s main offerings include smartphones and 5G base station equipment, both of which use the company’s self-designed chips, though it also procures some from third-party suppliers. Stockpiling chips makes sense for 5G base station equipment, said Sheng Linghai, a semiconductor analyst at the research group Gartner, because they usually have a longer replacement cycle than those for smartphones.

The company is preparing to enter mass production for many of its 5G series of phones in the coming months. According to a previously revealed plan, its flagship Mate 40 5G phones, set to released in the second half of 2019, will contain its Kirin 1020 chips.

According to Counterpoint Research, Huawei’s Kirin 1020 series was to be produced by TSMC, using its 5-nanometer chip production technology, which is currently the most advanced in the world.

Production of Huawei’s Mate 40 will also be affected, according to analysts at Taiwan-based research group TrendForce. According to TSMC’s timetable, 5-nanometer chips only began production this year and won’t be mass produced until yearend.

Analysts at TrendForce said the true impact will depend on whether the U.S. gives TSMC a license to supply products to Huawei.

Douglas Fuller, an associate professor at the City University of Hong Kong who specializes in China’s technology industry, told Caixin he believed TSMC hoped to secure such a license in return for its pledge to build a $12 billion plant in the U.S. state of Arizona. If a license is not granted, TSMC could cancel those plans, Fuller said.

If no license is granted, it will threaten Huawei’s recently gained market share in China, said Jia Mo, a smartphone analyst at Canalys.

Huawei has already seen its smartphone sales plummet in overseas markets after the first sanctions barred it from using Google’s popular app services like Gmail and YouTube. That prompted an aggressive pivot inward for the company which has since focused on winning consumers at home.

Annual sales in markets outside China will be expected to be cut in half this year, according to Strategy Analytics.

If Huawei won’t be able to obtain custom-made chips from chip manufacturers like TSMC, it could still procure alternatives from third-party suppliers under the latest U.S.

Zhao Ming, who oversees Huawei’s smartphone brand Honor, told Caixin on May 24 that the company would work with Taiwan chip designer MediaTek.

Still, using third-party chips could could hurt the quality of Huawei’s offerings from 5G base stations gear to smartphones, analysts said. MediaTek’s chipsets are at least one-year less advanced than those of HiSilicon’s, they said. Gartner’s Sheng expected Huawei to allow other chip design companies to continue making customized chips for it, potentially by allowing them to use its intellectual property.

In the longer term, the sanctions pose greater challenges for Huawei’s 5G gear business. The company has acquired some of the skill to make the more advanced programmable chips required for its 5G gear, but it has mostly relied on U.S. companies to provide them. The company has not disclosed what portion of its stockpile they make up.

But after it burns through them, Huawei’s 5G business will be in trouble, Gartner’s Sheng said.