By Wang Mengyao and Matthew Walsh 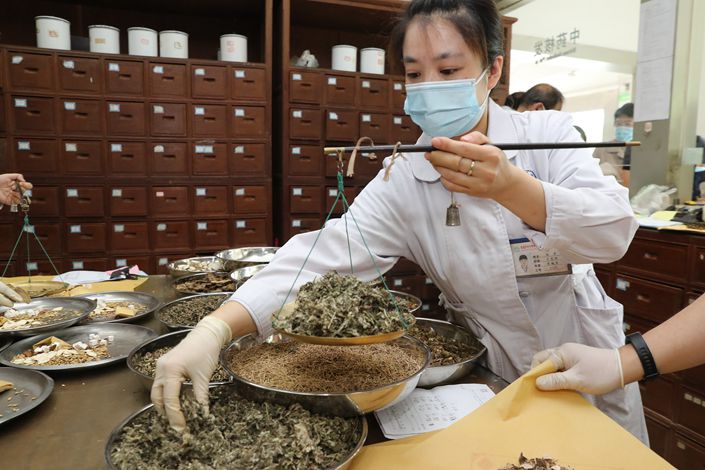 Although TCM is widely available in Chinese hospitals, its critics say its practices have little basis in science, are unsupported by clinical trials, and can be harmful to health.

A draft regulation under public consultation in Beijing that would criminalize the slander of traditional Chinese medicine has drawn sharp criticism from legal experts who say it is too open-ended and may exceed the city’s legal authority.

The document (link in Chinese), which was submitted for public feedback Friday by the Beijing Municipal Health Commission, states that “no organization or individual may engage in fraudulent or exaggerated publicity about TCM, use TCM’s name to gain illegitimate advantages or harm the public interest, or defame or slander TCM via any means or behavior.”

It adds that those who do vilify TCM could face legal action under the crime of “picking quarrels and stirring up trouble.”

The draft ordinance is the latest development in China’s years-long effort to bring legal norms and standards to an industry that has thousands of years of history, but also has a reputation for questionable scientific foundations and lax regulation.

“What are the standards for determining what constitutes defamation and slander? Because (the document) lacks these definitions, it will leave a huge amount of room for administrative interpretation,” said Wang Xixin, a law professor at Peking University.

Citizens will naturally hold different views on a practice whose effectiveness is debatable, said Tsinghua University Law professor He Haibo, adding that the document displays a lack of confidence in the position and effects of TCM as well as an “excessively superstitious” approach to administrative and criminal punishment.

“How does placing this cloak of invincibility around TCM spur its further development?” He said.

In an opinion piece for Caixin, Deng Xueping, a lawyer at Capital Equity Legal Group in Shanghai, said the punishments outlined in the draft may violate China’s Legislation Law.

“Only China’s National People’s Congress has the legal authority to draw up laws that restrict or remove the personal freedoms of citizens,” Deng wrote (link in Chinese). “Even if the Standing Committee of the Beijing Municipal People’s Congress passes these regulations, public security organs cannot use them as a basis for enacting public order punishments or criminal accountability.”

Beijing’s draft law builds on China’s 2017 national TCM law, which recognizes the practice as an “important component” of the country’s health care system, supports its protection and development, and states that it be regulated in accordance with its own unique features. But the national TCM law does not include articles that criminalize acts of defamation or slander.

Efforts by the Chinese government to promote TCM worldwide scored a major victory last year when the World Health Organization announced it would include some of the practices in its International Statistical Classification of Diseases and Related Health Problems.

Although TCM is widely available in Chinese hospitals, it is also controversial. Its critics say its practices have little basis in science, are unsupported by clinical trials, and can be harmful to health.

Last year, a hospital in central China’s Jiangxi province suspended a TCM treatment after 92 children suffered burns and other skin irritations, according to local news reports.

In 2018, authorities in North China’s Inner Mongolia autonomous region detained a doctor based in the southern province of Guangdong for nearly 100 days on suspicion of damaging the reputation of Hongmao Medicinal Liquor, a popular traditional remedy. The doctor had called the liquor a “poison” and publicly questioned the health benefits of its ingredients.