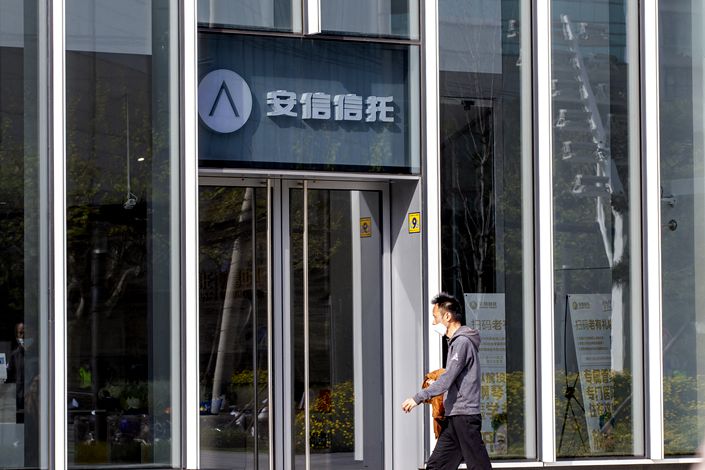 An Anxin Trust office in Shanghai on April 7.

Shanghai police have detained the actual controller of Anxin Trust Co. Ltd. over allegations he issued loans without following proper review procedures, after the company reported huge losses and failed to repay trust products worth billions by the end of last year.

Gao Tianguo, who controls Shanghai Gorgeous Investment Development Co. Ltd., the biggest shareholder of Anxin with a 52.44% stake, has been detained on suspicion of violating a law that prohibits irresponsible lending practices that result in large losses, according to an Anxin filing (link in Chinese) with the Shanghai Stock Exchange on Saturday. Such practices can include abuse of a person’s position to lend to friends or other associates, even though they may not qualify to receive such loans.

The police investigation is ongoing and Anxin will disclose related information to investors in a timely manner, the filing said.

Shanghai-based Anxin was one of the best performers out of China’s 68 authorized trust companies in 2017. But the company plunged into the red in 2018 due to its ambitious and risky investment strategy, with most of its investments plowed into projects owned by Gao or people connected to him.

Anxin’s stock ticker was placed under “special measures” by the exchange operator in May, signifying it is a risky investment and has performed poorly, after it reported its 2019 loss (link in Chinese) was nearly double its 2 billion yuan 2018 loss. The limit of how far Anxin’s share price can change in a single trading day has since been reduced to 5% from the normal market limit of 10%.

In July, Shanghai’s local banking and insurance regulator stepped in and ordered Gao to dispose of his stakes in Anxin and other financial institutions, and to use the proceeds to plug the massive hole in Anxin’s balance sheet, several institutional investors with knowledge of the matter told Caixin previously.

The regulator sent representatives to Anxin to closely monitor its business operations and told the company to stop issuing new products to avoid creating a Ponzi scheme, in which the proceeds raised from new sales are used to repay earlier investors.

Anxin is discussing a restructuring plan with Shanghai Electric Group Co. Ltd., which is currently investigating Anxin’s assets and debts, according to a filing released by Anxin on May 30. State-owned Shanghai Rural Commercial Bank Co. Ltd. and Shanghai Guosheng Group Co. Ltd. have also participated in such discussions with Anxin, people familiar with the matter told Caixin.

A previous version of this story incorrectly identified Gao Tianguo as the controller of Anxin Trust. Gao is the actual controller.