Editorial: China Can and Should Join Asia-Pacific’s Largest Free-Trade Pact 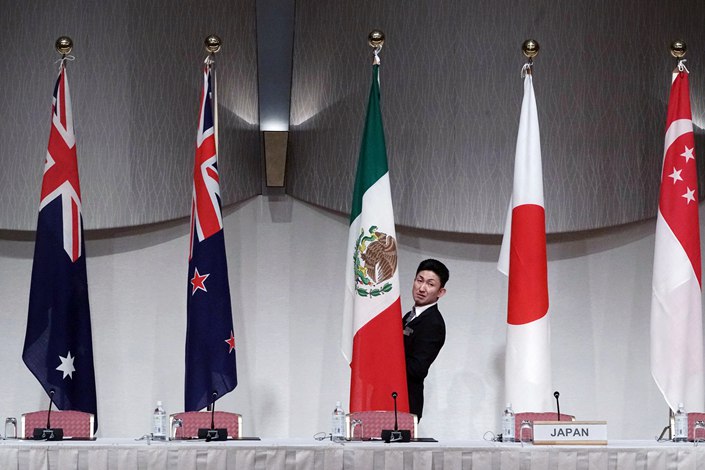 A staff member adjusts the Mexican flag before a joint press conference of the Comprehensive and Progressive Trans-Pacific Partnership (CPTPP) in Tokyo in January 2019.

Grand targets have emerged from China’s systemic reforms. During a press conference at the recent Two Sessions political meetings in Beijing, Premier Li Keqiang said China holds a “positive and open attitude” toward joining the CPTPP, a major international trade treaty. This was the first time a Chinese leader had publicly stated the country’s position on the CPTPP, and it made waves in the international community.

We understand that the “positive and open attitude” firstly refers to the need for deeply researching the challenges China faces and carefully exploring the possibility of and roadmap for the country’s participation in CPTPP, which stands for the Comprehensive and Progressive Agreement for Trans-Pacific Partnership.

Second, we must evaluate the pros and cons of joining, based on the overall program of deepening Chinese reform and opening-up, so as to avoid artificially setting bottom lines or no-go areas that may scupper the whole endeavor.

In fact, these points are two sides of the same coin. We must remain particularly clearsighted about the latter, however.

The CPTPP’s predecessor was the TPP, or Trans-Pacific Partnership. After the United States withdrew from that treaty in early 2017, the 11 other countries involved in drafting it — which include Japan, Canada, and Australia — made some adjustments to the agreement and gave it its new moniker. However, its goal of being a comprehensive, high-level free trade agreement for the 21st century did not substantively change.

The agreement came into effect on Dec. 30, 2018. It is currently the largest free trade zone in the Asia-Pacific and the third-largest in the world. If China can join, CPTPP economies will account for one-third of global GDP, cover nearly 2 billion people, and become the biggest regional trade system in the world.

China’s participation in the CPTPP would hold great significance for both Beijing and all the other signatory nations. All projections based on a variety of different assumed scenarios indicate that China’s admittance to the agreement would boost the domestic economy and global trade. Currently, unilateralism and protectionism are in vogue worldwide, throwing down obstacles to globalization. The CPTPP represents a future development direction for free trade. If China can join, it will be akin to it joining the WTO in 2001. For the WTO system, which is now mired in difficulty, the CPTPP also provides a frame of reference for reform.

The reason why the CPTPP calls itself “comprehensive and progressive” is because it contains requirements for competitive neutrality, intellectual property protection, environmental protection, and labor rights and privileges in addition to the usual removal of customs and trade barriers and lowering of tariffs. This reflects the international community’s new recognition of the relationship between freedom and prosperity. At their root, these requirements are consistent with China’s reform and opening up or social advancement.

In recent years, China has continued to deepen reform and expand opening. Even during the coronavirus outbreak, China’s decisiveness on free trade drew a lot of attention as the country pushed for financial opening and the construction of a free trade port in the southern province of Hainan, as well as fighting for the Regional Comprehensive Economic Partnership, scheduled to be signed this year.

The significant progress made on government reform, trade zone construction, phase one of the U.S.-China trade agreement, and an array of other trade and investment agreements that have either been signed or are under negotiation all make the conditions for China’s entry into the CPTPP more mature.

In addition, compared to the content of the TPP agreement, the CPTPP has frozen or amended more than 20 clauses, somewhat lowering the thresholds and loosening the conditions for participation.

The U.S.’s withdrawal has also lowered the difficulty of negotiating China’s entry into the CPTPP. This is an opportunity not to be missed. The U.S., which sees China as a strategic adversary, might rejoin the CPTPP in the future. If China cannot join before then, the negotiation procedures will become a lot more complicated.

Many Chinese officials and scholars are eagerly awaiting China’s rapid entry into the CPTPP. Yet there are a few other voices. Some believe there is little significance in joining the CPTPP because China is already the world’s largest trade partner, has signed many bilateral and multilateral free trade agreements, and is actively promoting its Belt and Road Initiative.

Others say China’s economy is so massive that the CPTPP needs us more than we need them, and we should use our clout to negotiate special conditions. The most influential position is that the CPTPP’s requirements for state-owned enterprises (SOEs), workers and the free flow of data violate China’s bottom line, and we should not agree to them.

The abovementioned positions are entirely at odds with the notion of proactive opening. The measures China has already taken to open its economy were entirely necessary, but their strength, breadth and depth cannot compare with the kind of systemic opening required to join CPTPP.

We can always discuss a few special conditions during the negotiations, but when it comes to its core clauses, the CPTPP cannot be significantly changed. It will not permit China to pick and choose as if at a buffet. That would be patently unfair to other member countries that have enacted painful reforms to join CPTPP, and would actually harm China’s original intention of pushing further reform through opening.

It is particularly important to note that we must not whimsically set bottom lines and no-go areas. China admittedly faces systemic obstacles to joining CPTPP, but most of those the hard bones and deep waters of reform. If we don’t accept the need for them, there will be no way to realize systemic transformations of opening up, such as the flow of commodities and productive elements and the absorption of new rules.

Let’s take SOE subsidies as an example. The Chinese government has previously announced its acceptance of the principle of competitive neutrality. If people continue to cause trouble on this issue, they are probably just fighting for powerful vested interests.

Another example is cross-border data flows, which many people view as a dangerous road. In fact, China’s Internet Security Law already leaves room for this by permitting appropriate demands by non-Chinese entities.

Although some people believe China cannot accept the CPTPP’s labor principles, they do not actually conflict with the spirit of the country’s constitution. Of course, because of China’s current system and the risk to social stability, the government will find it hard to commit to all the requirements. But a solution can be explored through exceptional and transitional arrangements set by China and approved by other member states. Overall, the issue does not call for binary, “either-this-or-that” thinking.

Recent times have seen the international community growing increasingly concerned about Sino-U.S. “decoupling.” China’s best response is to further expand opening and bind itself even closer to the rest of the world.

Now that China’s leadership has expressed its openness to CPTPP, the country should step up its research into an operational plan, engage in active dialogue with CPTPP member states and begin the negotiation process at the earliest possible opportunity.

China’s experience of joining the WTO shows that even when some demands look out of reach, they can actually be met if we really stretch ourselves. Other countries with similar social systems and at similar developmental stages to China have already made the leap. China should once again open its arms to embrace the world, and proceed with confidence.