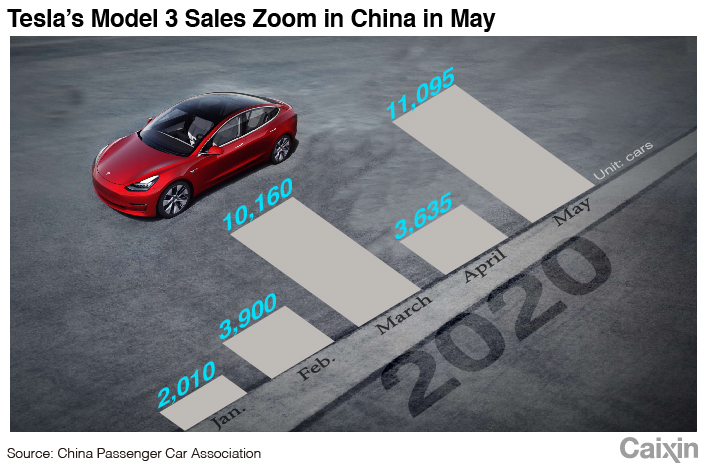 Tesla retook the crown as China’s largest vendor of new energy vehicles in May amid the growing popularity of its domestically built Model 3 pure electric cars.

The May Model 3 sales growth comes after the Palo Alto-based company announced a price cut for its China-made standard range Model 3 sedan on the last day of April. This was in order to gain eligibility for newly revised government subsidies for new energy vehicles costing less than 300,000 yuan. Tesla went on to slash the price of its long-range China-built Model 3 by about 20,000 yuan ($2,818) two weeks later, even though the move did not help it qualify for state subsidies.

In May, total sales of new energy vehicles by manufacturers to dealers in China, pure electric cars and plug-in hybrids included, amounted to 70,200 units, representing a year-on-year drop of 25.8% and a month-on-month increase of 19.5%, the CPCA said.

In April, Tesla was China’s second-largest vendor of pure electric vehicles with sales of 3,816 units including the Model 3, the Model S and the Model X, taking second place behind its Chinese rival BYD with 5,139 pure electric car sales in the same month. Tesla does not produce plug-in hybrids.