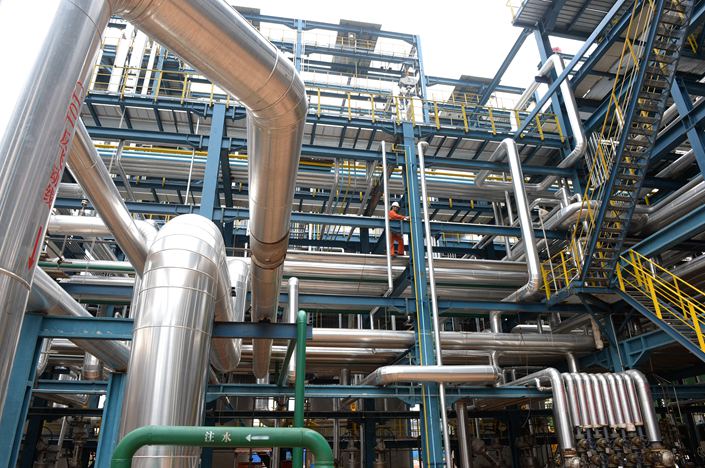 Some experts have raised concerns about whether there would be enough demand for products from this mega refinery.

China’s central planning agency has given the go-ahead for planning to begin for the construction of a mega refinery in East China’s Shandong province that will replace at least 10 barely profitable facilities in the oil refining hub, Caixin has learned.

The approval marks another step forward for a provincial government plan to consolidate the privately owned refineries known as “teapots” in an effort to improve their profitability and reduce overcapacity.

After two years on the drawing board, the refinery project has been given the green light to move forward with more detailed construction planning, multiple industry insiders have indicated.

The planned refinery will be operated by Shandong Yulong Petrochemical Ltd., a company created under the consolidation plan to operate the new refinery. Once construction of the 127.8 billion yuan ($18 billion) first phase is completed, the refinery will be able to process up to 20 million tons of oil a year.

Shandong is home to 37 refineries with a total annual capacity of 130 million tons. So far, 10 refineries have agreed to dismantle their facilities and move operations to the planned new project, said one refinery manager.

Data from consulting firm JLC shows these 10 refineries have a combined capacity of 27.8 million tons.

Projects with such enormous investments like Yulong Petrochemical will help speed up the economic recovery, said Zhu Fang, an official at the China Petroleum and Chemical Industry Federation, an industry association.

The Shandong government has cut red tape to speed up investment in the province in the wake of the economic damage caused by the coronavirus pandemic, local state media has reported. However, some experts have raised concerns about whether there would be enough demand for products from this mega refinery, considering that the domestic market is currently awash in oil products.

In contrast, Yulong Petrochemical’s biggest shareholder is Nanshan Group Co. Ltd., which produces aluminum products and operates a wool textile business and travel agency — none of which create petrochemical demand.