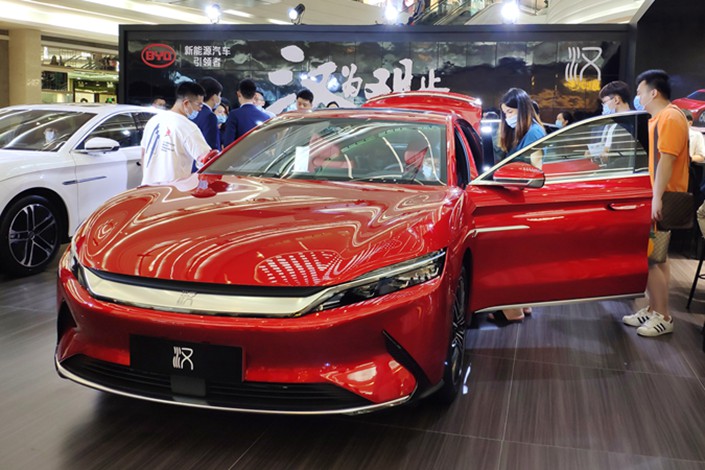 Shoppers check out a BYD electric car at a mall in Shenzhen, South China's Guangdong province, on May 16.

China’s southern boomtown of Shenzhen has announced that it will give up to 40,000 yuan ($5,659) in subsidies per vehicle to individuals buying new-energy vehicles (NEVs) in an effort to support to a domestic auto industry struggling amid the Covid-19 pandemic.

However, questions have been raised about whether the city’s subsidies were designed to inordinately benefit a local automaker.

Qualifying NEV owners will be able to receive Shenzhen’s subsidies on top of existing incentives offered by the central government to encourage people to buy passenger cars that meet certain technical requirements.

Shenzhen’s incentives, which are available for purchases made this year after June 7, are just the latest in a stark reversal to government policy toward the auto industry, which has been reeling from a sales slump that was exacerbated by the Covid-19 pandemic.

Shenzhen is not the first city to announce new NEV incentives. On May 7, the Guangzhou city government confirmed its own subsidy scheme.

In late April, the central government announced its own subsidy scheme amid sluggish auto demand. Consumers who buy pure electric passenger cars can receive subsidies of up to 22,500 yuan per vehicle from the central government. That means qualifying car buyers in Shenzhen can receive as much as 62,500 yuan per vehicle when they buy an NEV for personal use. Vehicles that will be used for business, such as for ride-hailing services, do not qualify for Shenzhen’s subsidies.

The subsidies will be applied for by individual buyers, and the government will issue them directly into their bank accounts.

China first introduced incentives such as preferential tax rates and subsidies for NEVs a decade ago, spurring explosive growth in the market. Since 2017, however, policymakers have been rolling back NEV incentives in hopes of getting the industry to stand on its own feet. In June 2019, authorities announced the end of all local government incentives and the gradual phasing out of financial aid from Beijing.

Although Shenzhen’s new policies will boost NEV sales in aggregate, different vehicle models will benefit to different degrees under the scheme, which appears to favor BYD, a person who works for an auto dealership in Shenzhen told Caixin.

An executive in charge of NEV products at one carmaker told Caixin there was no reasonable basis for restricting the size of the cars eligible for the subsidy. One of its technical requirements is that vehicles must be between 4.97 and 5.2 meters in length. At 4.694 meters long, the Tesla Model 3 misses out, while BYD's flagship model happens to fall within the range.

According to the document by Shenzhen authorities, to qualify for the subsidies, the model a consumer purchases need to fulfill multiple technical standards, but Caixin found that many models in the Chinese electric-vehicle market such as Tesla’s Model 3, Xpeng’s G3 and Nio’s ES6 do not meet all the requirements and hence do not qualify for local subsidies, whereas a number of BYD’s models meet every requirement.