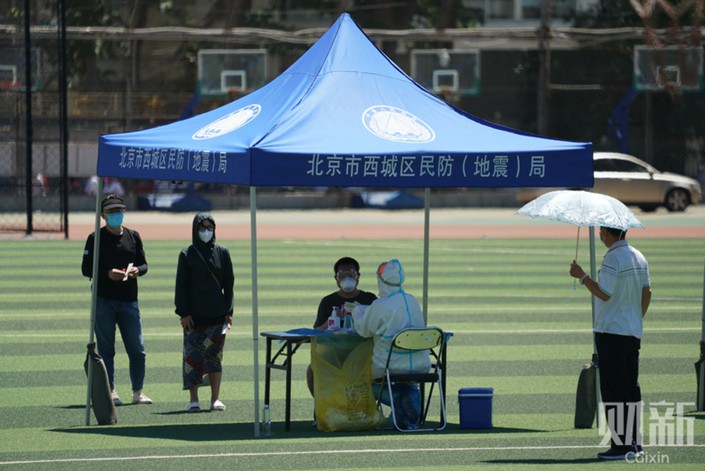 Beijing announced dozens of new coronavirus cases on Monday as the city government stepped up public health measures to staunch a resurgence of Covid-19.

The Chinese capital confirmed 36 new infections on Sunday, the same number as the day before, according to a notice (link in Chinese) on the municipal health commission’s website. Beijing has now added 79 new cases since Thursday, prior to which it had logged no new infections for nearly two months.

The notice also said authorities had identified six more asymptomatic individuals, who have the virus but show no signs of Covid-19. China does not include asymptomatic people in its official case tallies.

Authorities on Monday continued to test, trace and isolate thousands of people connected with a wholesale market in southwestern Beijing where the new outbreak is believed to have begun. The municipal health commission said in a separate statement (link in Chinese) on its website that it recorded 59 positive coronavirus tests on Sunday, 21 of which were included in the city’s confirmed new cases.

The new infections brought Beijing’s official case count to 499. The death toll was unchanged at 9. Nationwide, the cumulative case count as of Sunday was nearly 85,000, including 4,645 deaths, according to an online tally (link in Chinese) by the National Health Commission.

Where did the virus come from?

Scientists are focusing their inquiries on the now-shuttered Xinfadi wholesale market in Beijing’s Fengtai District, where traces of the virus were found on food and utensils, including chopping boards used to prepare imported salmon. The market supplies 80% of Beijing’s agricultural products, according to its official website.

Yang Peng, a researcher at Beijing’s municipal disease control center, said Sunday in an interview with China’s state broadcaster that initial testing suggested products contaminated with the virus had entered the country from Europe, although tracing is still in progress.

“We still can’t confirm exactly how the virus got here,” he said. “It could be from contaminated seafood or meat, or from an infected person coming into the market.”

A senior official at the China Center for Disease Control and Prevention (China CDC), who spoke on condition of anonymity because they are not authorized to speak to the media, said the genetic makeup of virus samples collected at the market resembled variants found in Europe.

The notion that the virus exhibits geographically specific variation is based on a controversial study published by a group of Cambridge University researchers in April. Other scientists, like Edinburgh University molecular evolution expert Andrew Rambaut, have criticized what they perceive as serious flaws in the paper.

The Beijing municipal information office did not mention the source of the virus at a Monday morning press conference.

How did it spread?

Yang said the virus spread either via goods or between people.

Products imported from parts of the world with severe outbreaks may have been contaminated in their country of origin and then imported into China, he said.

Alternatively, an infected person in China could have brought the virus into the market and spread it to people and products there, Yang said. According to its official website, the market has 1,500 administrative staff, 2,000 vendor booths, and thousands of customers per day.

Wu Zunyou, the top infectious diseases expert at the China CDC, said (link in Chinese) in a Sunday interview with Caixin that the first transmission route is more likely. Beijing had recorded no new infections for more than 50 days prior to the new outbreak and the cases identified so far have no history of outside travel, making a human virus source less probable, he said.

The presence of virus traces on the chopping boards doesn’t necessarily mean salmon was the initial source. “Anyone or anything that came into contact with the boards could be it,” he said.

Authorities have tested more than 5,000 food samples from wholesale markets and supermarkets across Beijing since Thursday. As of Sunday, 40 samples taken at Xinfadi had come back positive for the virus while all others returned negative results, officials said.

Has it already spread beyond the market?

Based on the available information so far, Beijing’s case rebound appears to center on the market and the surrounding area.

All 62 new infections confirmed between Thursday and 1 p.m. Sunday were linked to Xinfadi or people who had been there, the municipal information office said.

Zhang Wenhong, the high-profile head of the infectious diseases department at Shanghai’s Huashan Hospital, told Caixin on Sunday that the lack of cases with no ties to the market meant that authorities had likely spotted the cluster early.

“On the basis of the strength and speed with which they are currently handling it, this outbreak can be controlled,” but the possibility of more flare-ups could not be ruled out, he said.

Beijing authorities ratcheted up containment measures over the weekend in a renewed effort to curb the virus’s spread.

Officials locked down 11 communities in Fengtai and one in southwestern Fangshan district after infections were discovered among residents there, the city government said (link in Chinese) on its official website Monday.

The municipal health commission said (link in Chinese) in an online statement that two-thirds of approximately 9,000 people at the market in Fengtai had completed nucleic acid tests by 6 a.m. Monday. None came back positive for the coronavirus.

Tests have also been conducted on some 19,000 people who live in the district’s shut-down communities or had visited the market in the past two weeks, the statement said. None have returned positive results.

Other parts of Beijing raised their official emergency response levels over the weekend. Some of the city’s recreational areas, which had returned to near-normality in recent weeks as the virus threat abated, once again fell quiet.

Stores and restaurants in the typically bustling central district of Sanlitun were emptier than usual at midday Monday. Five local security workers, electronic thermometers in hand, said they had been ordered to be extra vigilant when letting people in and out of local shopping complexes.

“It’s because of all those new cases,” one said.