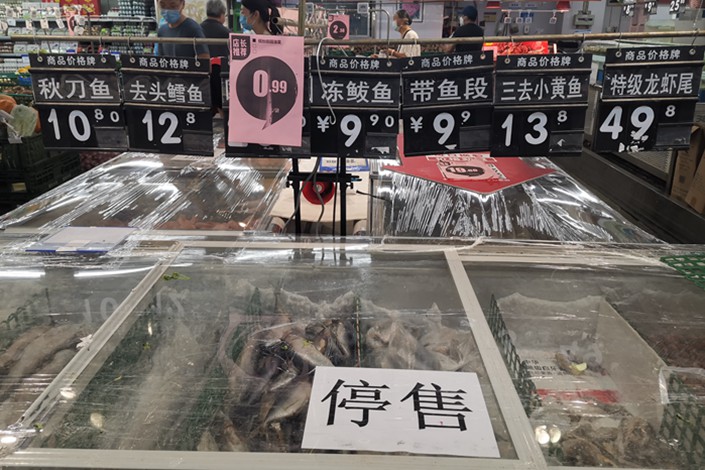 A supermarket in Beijing informs shoppers Sunday that it has stopped selling salmon and other seafood.

A supposed link between Beijing’s Covid-19 outbreak and imported salmon has sent a chill through global seafood markets, as Chinese consumers turn away in fear and exporters await stepped up customs restrictions.

Beijing’s outbreak has continued to escalate since Thursday with 79 cases now confirmed in and around Xinfadi, a wholesale market that is the source of some 70% of the capital’s fresh vegetables.

Supermarkets across Beijing and further afield have emptied their shelves of salmon, even as experts expressed skepticism about the outbreak’s alleged links to Norwegian salmon found at the market and to a so-called “European strain” of the virus. But Chinese seafood buyers are already voting with their feet.

“The news has destroyed us,” said Rudy Guo, who runs high-end restaurant chain Oysterlicious Group, which has two locations in Beijing and five in Shanghai. Guo said business was down about 90% since the rumors surfaced and he was expecting the worst.

“I think everyone in Beijing is going to stay away from seafood (restaurants) for a while, at least four to six weeks,” Guo predicted.

With seafood tainted in the public eye, it did not matter that his restaurant barely had any salmon on the menu, he said.

“They don’t want to be dealing with any seafood for fear of it being contaminated,” he told Caixin.

And orders were down across China, not just in Beijing. “Chengdu supermarkets removed all salmon,” he said.

Jadwin’s warehouse in Sichuan province’s capital Chengdu, which holds salmon imported from Scotland, received a surprise inspection from health authorities on Monday. “They’re visiting everybody that imports any type of salmon, going to the registered warehouses and actually taking samples to labs,” he said.

He said products made as long ago as September were tested. “They really were testing everything, every batch.”

Some purchases of the company’s domestically farmed salmon had increased, he said, suggesting the worst of the confidence hit may be reserved for imported products.

Zhang Yuxi, chairman of the Beijing Xinfadi Wholesale Market, attempted to lay the blame on a cutting board with imported salmon in an interview with the Beijing News on Friday. Gao Xiaojun, a spokesman for Beijing Municipal Health Commission, said on Saturday that of 40 different environmental samples from the market that tested positive, “some are from the salmon chopping board, some are not.”

Yang Peng, a researcher at Beijing’s municipal disease control center, told state broadcaster CCTV on Sunday the source of the Xinfadi outbreak was still under investigation, but initial testing suggested products contaminated with the virus had entered the country from Europe.

“It could be from contaminated seafood or meat, or from an infected person coming into the market,” Yang said.

Top national CDC official Zeng Guang said Saturday that preliminary results pointed to a European strain, but that this was only based on a small number of samples.

Other experts said the fact that samples resemble coronavirus variants found in Europe does not mean the infection was imported from there, as other outbreaks in China, including in Mudanjiang in the northeastern province of Heilongjiang, have also tested positive for the so-called “European strain.”

And the idea that the virus exhibits geographically specific variation is also contested. It’s based on a controversial study published by a group of Cambridge University researchers in April. Other scientists, like Edinburgh University molecular evolution expert Andrew Rambaud, have criticized what they perceive as serious flaws in the paper.

Multiple virologists told Caixin (link in Chinese) that the presence of coronavirus on salmon on a cutting board did not prove the salmon itself was the source. They agreed it was far more likely the surface of food cut on the board had been contaminated. There is also no scientific evidence that live fish can carry the virus.

Seafood orders were down as far away as Australia. Bryan Keay, general manager of trade and development business at Geraldton Fishermen’s Co-operative Ltd. in Western Australia, said demand dropped 50% overnight Monday for the fresh lobster and snow crab the company exports to cities across China.

Seafood orders tend to be relatively consistent day to day, Keay said, and it was clear that the Beijing outbreak had “got the buyers nervous.”

There were also whispers of strict new customs restrictions. Some Australian seafood exporters were told Monday to prepare for stepped up inspections at Chinese import ports, Caixin has learned. Any seafood selected for random inspections will be quarantined for 36 hours until the tests come back, they were told.

While that would not significantly affect frozen seafood, export operators told Caixin such delays could make live seafood exports unviable.

“After a 24 hour flight, you throw another 36 hours on top and well, you can kiss goodbye to your product,” said Ryan Morris, general manager and part owner of Sydney-based exporter AWC Seafood, which sells about half of its live abalone and lobster stock to China. He said others in the industry had told him of the changes, and that he had not heard them directly from Chinese customs authorities.

“Clearly no buyers are going to want to take the risk with that,” said another live seafood exporter who asked not to be identified citing ongoing sensitivities.

Live seafood exporters told Caixin they were waiting to hear what the inspection rate will be to calculate the effect on their business, before deciding whether it makes financial sense to temporarily cease exports to China.