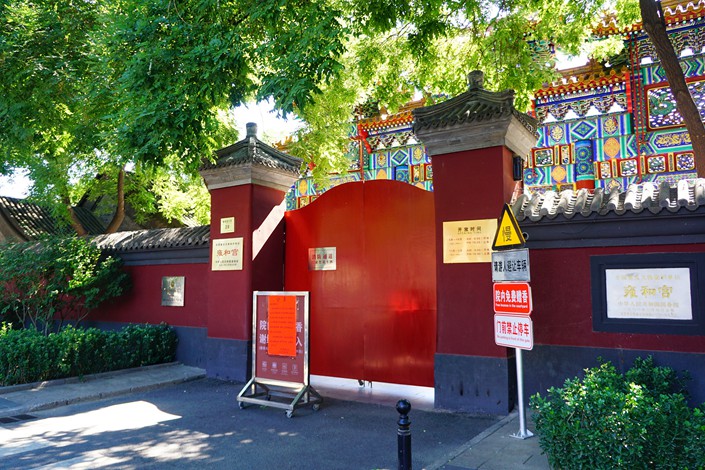 The Lama Temple, a temple for Tibetan Buddhism dating back more than 300 years, had initially closed on Jan. 24.

Some of Beijing’s top attractions have closed their doors, sometimes just days after reopening, as the city grapples with its worst bout of Covid-19 infections since the pandemic began.

Even as the pandemic swept China earlier this year, centered on the central province of Hubei, Beijing had remained relatively untouched, reporting less than 500 cases altogether. But a local outbreak centered on the Xinfadi wholesale market in the city’s suburban Fengtai district has suddenly added more than 70 confirmed infections to the city’s total since last Thursday.

Shortly after the first new cases were reported on Thursday and Friday, the National Centre for the Performing Arts, Yonghe Lamasery, also known as the Lama Temple, and the Beijing Tianqiao Performing Arts Center all announced their temporary closure as of Saturday, and began refunding tickets for people affected by the closures.

The Lama Temple, a temple for Tibetan Buddhism dating back more than 300 years, had initially closed on Jan. 24 as major visitor attractions throughout the country began shutting down at the outbreak’s start. It reopened to limited visitor volumes on June 10, following a pattern used by many major attractions to avoid the higher risk of contagion that comes with crowding, but closed just three days later.

The National Centre for the Performing Arts had also closed on Jan. 24, and then reopened on June 2 to limited visitor volumes, before its re-closure on Saturday.

The National Museum of China was still operating as of Monday, according to its website, though the museum is always closed on Mondays. The Forbidden City — Beijing’s most famous tourist attraction — was open as well, although a person who works there said the complex’s many buildings containing exhibitions were closed.

The Forbidden City had reopened its doors during the May Day holiday at the start of last month, shortly after Beijing became one of China’s last major cities to lower its emergency response from the highest level to the second-highest. The level was lowered further to the second-lowest in the four-tier system on June 6, though individual areas have raised their alert levels in response to the new outbreak.

The rapid flip-flop caught up both tourist sites and other recreational facilities, in what’s likely to become a regular pattern as cities try to avoid second waves of infections. Following a meeting on Friday, Beijing’s local team tasked with implementing disease control and prevention measures requested enhanced controls over cultural, travel, dining and other activities. The group later also requested tightened controls for interprovincial travel and sporting events, and delayed the resumption of classes for elementary school students in grades one, two and three.

Beijing has also requested all swimming pools, underground gyms and shower facilities in the city to close, according to a Saturday notice posted at a gym and aquatic center in Fengtai district.