Sichuan Trust Mobbed by Investors Demanding Their Money Back 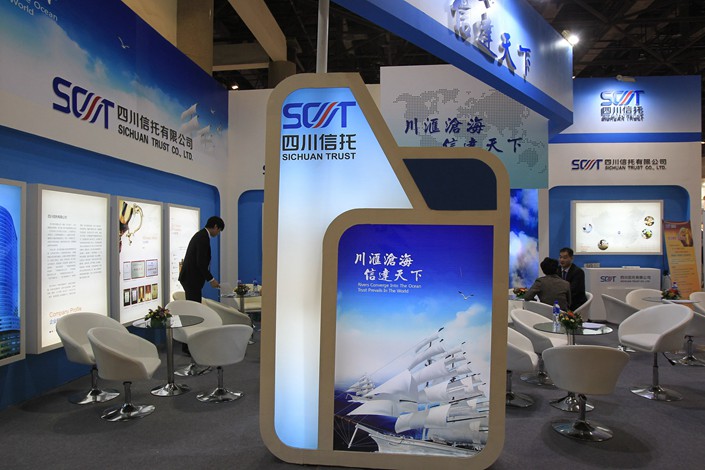 Hundreds of investors descended on the headquarters of Sichuan Trust Co. Ltd. in southwestern China on Monday to demand their money back after the company failed to repay principal and interest on investment products that matured last month, Caixin has learned.

The incident is just the latest blow to China’s $3.1 trillion trust industry, which Chinese regulators have recently sought to bring under closer oversight.

The investors who showed up at Sichuan Trust’s office building in Chengdu, Sichuan province, had put money into a type of investment product called a “trust of trust” (TOT), Caixin has learned.

In China, trust companies use the proceeds from selling trust products to invest in a wide variety of assets, including bonds, stocks and loans to private companies and local government financing vehicles.

A TOT is one step removed, with the proceeds from selling TOT products getting invested in other trust products. This structure creates an extra layer between TOT investors and the ultimate recipients of their funds.

Each issuance of a TOT product can draw about 50 individual investors who each pony up as much as 3 million yuan, the former employee said.

Sichuan Trust is currently running more than 10 series of TOT products, Caixin has learned. The outstanding value of these products is somewhere between 20 billion yuan and 30 billion yuan, Caixin learned from multiple sources.

Liu said the company will do whatever it takes to solve the problem within one year, according to a video of the meeting seen by Caixin. The investors, however, did not seem to buy it and requested the firm immediately repay them.

Mou said that Sichuan Trust will look into a variety of ways to repay investors, such as selling its office building or liquidating its subsidiaries’ shares, according to the video. He also said the company was seeking to raise at least 1.5 billion yuan in capital by expanding shares to existing shareholders or introducing strategic investors.

Sichuan Trust’s problems go back to at least late 2019 when local regulators began “closely monitoring” the company, Caixin has learned. Since then, the local banking watchdog has sporadically sent staff to work onsite.

In October and November 2019, a team of inspectors from China Banking and Insurance Regulatory Commission visited Sichuan Trust and provided some rectification suggestions, the company said in its 2019 annual report (link in Chinese), without elaborating.

In May, the company denied rumors that its capital pool business had been frozen, and it would be taken over by regulators.