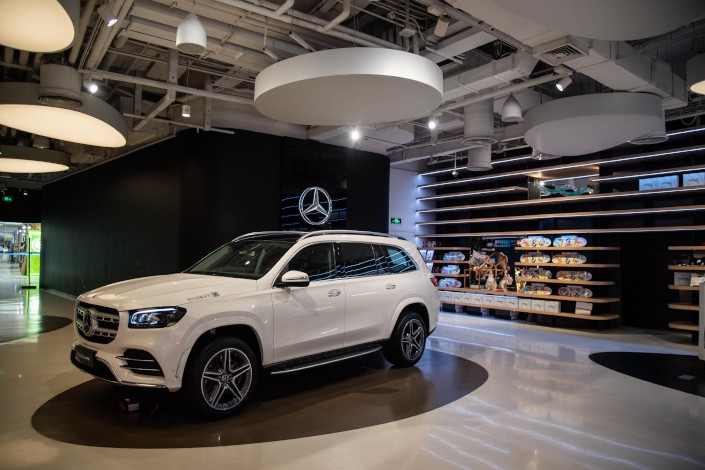 The 'Mercedes me' store in Beijing's Sanlitun neighborhood stands closed on June 16.

German auto giant Daimler AG’s Mercedes-Benz is preparing to shutter its original “Mercedes me” concept store in China, as it moves to cut costs after a major emissions scandal and more recent pressure from the global pandemic.

Mercedes opened the shop in Beijing’s upscale Sanlitun shopping district in 2016 as part of a global rollout of a concept more focused on boosting customer contact and less on actual car sales. Unlike its traditional showrooms featuring mostly cars and related products, the original “Mercedes me” in Beijing includes a restaurant taking up most of the second of its two floors, and a coffee shop taking up much of the first floor.

But Mercedes-Benz announced on Monday it would shutter the store at the end of this month. A company spokesperson told Caixin that “Mercedes me” represented a new model when it was introduced in China four years ago, with the main objective not focused on profits. It built and operated the first outlet as a template, aiming to eventually license the concept to other third-party operators.

The concept’s main partner in China is Applied Brand Solutions, a unit of Hong Kong’s Jardine Matheson Group, according to its website. The company describes Mercedes-Benz as its current “flagship partner,” and says it aims to establish 10 “Mercedes me” stories in the cities of Beijing, Shanghai, Chengdu, Shenzhen and Hangzhou by the end of this year.

The Mercedes-Benz spokesperson pointed out the Beijing Sanlitun store has already operated for four years and proven the model can be copied, fulfilling its mission.

Benz is pulling out of the store as its parent Daimler comes under financial pressure, following an emissions-cheating scandal that saw it fined 870 million euros ($983 million) last year in Germany. The company’s situation has been further undermined by the ongoing global Covid-19 pandemic that has put a major damper on car sales worldwide.

In the company’s 2019 annual report, it said it was looking to cut spending by 1.4 billion euros, including via staff reductions. Under the effects of the virus, the company’s profit before interest and taxes fell nearly 80% in the first quarter to 617 million euros.

As a result of the pandemic, AlixPartners estimated 2020 global car sales would fall 21% by 19 million, the equivalent of suddenly losing a market the size of Europe. In China the impact on luxury cars has been less severe. Luxury car sales rose 28% in May, well ahead of the broader market, according to the China Passenger Car Association.