By Yang Ge and Liu Yanfei 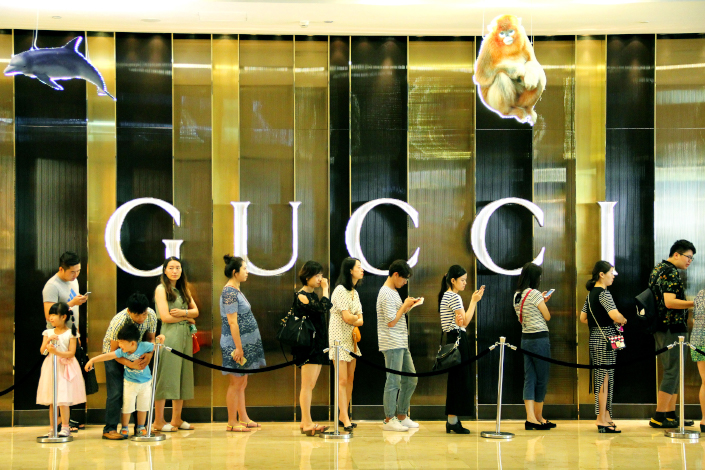 Customers line up outside a Gucci store in Nanjing in June 2016.

Luxury giant Kering SA, whose brands include Gucci and YSL, has elected Didi Chuxing President Jean Liu as one of its new board members, in a nod to China’s growing clout in the global luxury goods market.

Liu, whose Chinese name is Liu Qing, was one of three new directors elected to Kering’s board, alongside British actress Emma Watson and Tidjane Thiam, a former CEO of banking giant Credit Suisse and native of the Ivory Coast. Liu is the only Asian on Kering’s 12-member board, based on biographies of the 12 members on its website.

A Kering spokeswoman confirmed that Liu is the first-ever Asian member of Kering's board. The company emphasized the importance of diversity in its Tuesday message announcing shareholder approval of the three new board members.

“Their respective knowledge and competences, and the multiplicity of their backgrounds and perspectives will be invaluable additions to Kering’s board of directors,” Kering Chairman François-Henri Pinault said. “The collective intelligence that comes from diverse points of view and the richness of different experiences are crucial to the future of our organization. I am proud to add such impressive talents to the team.”

In addition to her current role as president of Didi Chuxing, China’s equivalent of Uber, Liu previously worked at Goldman Sachs. She is one of the few high-ranking women in China’s high-tech sector, and is also the daughter of Liu Chuanzhi, one of China’s earliest high-tech pioneers who founded the PC giant that would go on to become Lenovo.

Liu’s appointment comes as China has become one of the most important growth markets to both Kering and the broader luxury industry. The mainland Chinese luxury goods market was expected to grow 26% to 30 billion euros ($33.7 billion) last year, with Chinese customers accounting for 90% of the global market’s growth for the year, according to Bain & Co.’s annual report on the industry issued late last year.

Kering’s Asia Pacific region, which includes China, India and Australia but excludes Japan, accounted for about one-third of the group’s revenue in 2019.

Like its peers throughout the luxury and mainstream retail sectors, Kering has been hit hard by the ongoing Covid-19 pandemic that has led to national lockdowns and other measures that have sharply dampened consumer spending. The company’s revenue fell 16.4% in the first quarter to 3.2 billion euros, with its Gucci brand that relies heavily on Asia posting an even sharper 23.2% decline.

But some of the world’s top players started saying in April they were seeing positive signs coming from China, as the nation’s outbreak eased and shoppers resumed store-based buying after spending several months mostly confined to their homes. Many companies gave cautiously optimistic views in reporting first-quarter earnings that were far more downbeat.

At the time, Kering said its brand stores in China, South Korea and Macau had all reopened as of the end of March. The company said its sales on the Chinese mainland turned positive in April, but sounded a note of caution since the trend was only a few weeks old at that time.

This story has been updated to add Kering's confirmation that Liu is the company's first-ever Asian board member.