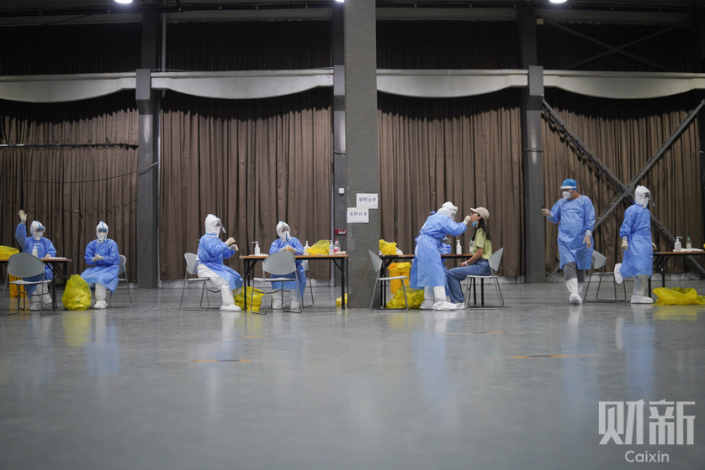 The new coronavirus outbreak in Beijing has been controlled, a senior disease expert said at a Thursday afternoon press conference.

Wu Zunyou, the chief infectious diseases expert at the China Center for Disease Control and Prevention, told reporters that the new cases announced by the Chinese capital each day “do not equate to new infections” because the people involved contracted the virus long before they showed symptoms.

New infections have fallen to a “sporadic” level, he said. Wu said earlier this week that Beijing had just days to douse its emerging Covid-19 hotspot.

The announcement came after Beijing reported 21 additional Covid-19 cases earlier Thursday, 10 fewer than the day before. The city also added three suspected cases and three asymptomatic cases, according to an online notice (link in Chinese) by the municipal health commission.

On Thursday afternoon, the government of Xicheng district in central Beijing said in an online notice that a primary school student had tested positive for coronavirus. Her parents, teachers and classmates have also been tested and returned negative results, the announcement said.

Beijing, which is home to 21 million people, has now identified 158 new Covid-19 infections in the last week, prior to which it went almost two months without noting any new cases. All of the new cases were locally transmitted.

Authorities have linked the case spike to a wholesale market in the southwest of the city. Health officials continued on Wednesday to aggressively trace, test and isolate people connected with the market, as Beijing restricted travel into and out of the city and raised its emergency response level on Tuesday to curb the spread of the virus.

During a Thursday press conference, Pan Xuhong, the deputy chief of Beijing’s public security bureau, clarified that the city has not been placed on lockdown. The additional curbs on travel out of the capital aimed to “decisively cut off (viral) transmission channels and doesn’t mean to shut down the city,” he said (link in Chinese).

Pan added that the travel restrictions mainly focused on confirmed, suspected or asymptomatic coronavirus patients and their immediate contacts; people who had visited the market or come into contact with its workers since May 30; and those from the 33 areas of Beijing deemed medium to high risk.

Additionally, authorities have encouraged people in the capital to avoid all nonessential travel out of the city and obtain negative nucleic acid tests within seven days of departure should they need to leave.

Meanwhile, the capital is stepping up efforts to deploy testing resources to fight the new outbreak. Health workers can collect samples from up to 400,000 people per day, according to Zhang Qiang, the deputy chief of testing at the city’s coronavirus task force. But public documents indicate a maximum of 90,000 people can be tested for the virus daily.

State media reported Wednesday that officials have given some vendors approval to move to five “temporary trading sites” away from the main market in order to stabilize the capital’s food supply.

Wuhan University virology professor Yang Zhanqiu said Wednesday in an interview with state-run Global Times that while Beijing’s case count will likely keep rising, the total number of cases is unlikely to exceed 1,000. He added the capital may bring the situation under control within one or two weeks.

“This is different from Wuhan,” he said, referring to the Chinese city where the first coronavirus cases were recorded. “Beijing’s outbreak has a clearly traced source … (which) has basically been cut off, and the outbreak has been controlled.”

Yang’s prognosis came after disease control officials said earlier this week that they had to strike quickly to stem the virus’s spread.

Beijing has reported a total of 578 Covid-19 cases and nine deaths as of Thursday.

Overall, the Chinese mainland reported 28 new infections on Thursday, the National Health Commission (NHC) said in an online notice. Outside Beijing, two further locally transmitted infections were logged in Hebei province along with one in the municipality of Tianjin. Both regions border the capital.

China’s official Covid-19 case count stood at 84,903 as of Thursday, according to the NHC. The death toll remained unchanged at 4,645.