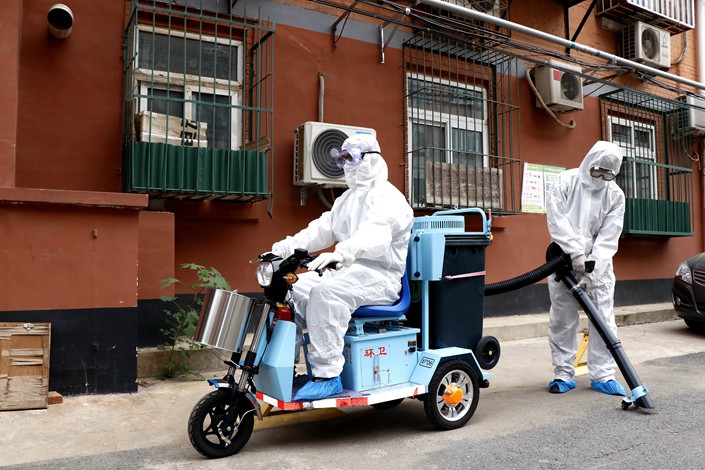 A Beijing residential compound is cleaned on June 17.

Beijing reported 31 new Covid-19 cases on Wednesday, four more than the day before, as other parts of China imposed restrictions on people entering from the capital.

The city has now logged 137 new infections since Thursday after going nearly two months without recording a single case.

Authorities have raised the capital’s public health emergency response level from three to two, the second-highest. In an effort to tamp down emerging coronavirus hotspots before they spread further, authorities have also locked down several residential compounds, launched mass testing and tracing initiatives, and closed certain businesses just days after they had reopened.

The municipal health commission said Wednesday in a statement (link in Chinese) on its website that it had also discovered an additional three suspected cases and six asymptomatic cases on Tuesday. Beijing’s total case count is now 557. The death toll remained at nine.

Also on Wednesday, Gao Fu, the head of China’s Center for Disease Control and Prevention, said (link in Chinese) the new outbreak may have begun “one month earlier” than the previously suggested period of late May or early June.

At least two dozen Chinese cities and several provinces had imposed (link in Chinese) new restrictions on travelers from Beijing as of Wednesday morning.

They included the eastern megacity of Shanghai, which required entrants from “high-risk areas” to quarantine for 14 days on arrival and take two tests for the virus, and entrants from “medium-risk areas” to register with the authorities within 12 hours. Some 28 neighborhoods and districts in Beijing were considered medium or high risk as of Tuesday night, according to a disease information app operated by the State Council, China’s cabinet.

Other major urban areas advised travelers from Beijing not to come at all, imposed shorter quarantine requirements, or permitted people to enter normally upon showing a green “health code” on their smartphones.

Health authorities in Hebei, Liaoning and Sichuan provinces have discovered new coronavirus cases in recent days, all of which are linked to the Beijing wholesale market at the center of the outbreak.

On Wednesday, the health commission of the eastern province of Zhejiang said in a statement on its official WeChat public account that a 36-year-old man had fallen ill with Covid-19. He is a longtime businessman at the Beijing market and a resident of the city of Taizhou, some 1,500 kilometers (932 miles) from the capital.

Workers in industries beaten down by Beijing’s initial coronavirus outbreak reacted wearily to the new restrictions.

A theater management professional surnamed Luo said the measures had again delayed two performing arts projects at major Beijing venues that were originally slated to take place in March or April but were postponed amid the previous outbreak.

While Luo’s job remains secure, “many friends don’t have that stability and will fall into financial difficulty again,” she said. She declined to give her full name as her company hasn’t authorized her to speak to the media.

Schools across the capital, many of which have been gradually reopening since March, reverted to online classes Wednesday morning.

Amid speculation about the outbreak’s impact on the “zhongkao” and “gaokao” — China’s grueling high school and college entrance exams — a spokesman for the municipal education commission said schools should “make dual preparations for both online and offline learning” for the coming semester, state news agency Xinhua reported.

As of the end of Tuesday, the virus had infected 84,867 people in China and claimed 4,645 lives, according to figures (link in Chinese) published online Wednesday by the National Health Commission.