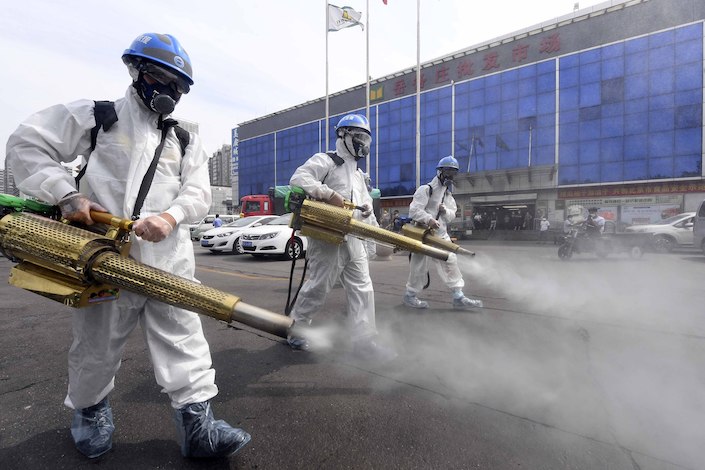 The municipal government of Beijing raised its Covid-19 emergence response level and reimposed some drastic disease-control measures after a new cluster of infections emerged in China’s capital.

The Beijing government elevated the city’s emergency response one notch to level 2, the second-highest among four levels of disease response, authorities said Tuesday night. The capital quickly rolled back reopening measures just days after most leisure venues in the city resumed services.

A resurgence of the pandemic flared up since last week as dozens of new infections were detected in connection with the now-closed Xinfadi Market, a local wholesale food market that supplies 80% of the city’s meat and vegetables. Between June 11 and 15, 106 new cases were confirmed, all linked to the market, a city official said Tuesday.

About 40% of flights in and out Beijing were canceled Tuesday while several interprovincial shuttle bus services were suspended, Caixin learned. Among 430 flights planned to take off from Beijing’s new Daxing International Airport Tuesday, about 260 were canceled, according to a person from the airport operator.

Compared with sweeping lockdown measures applied earlier in Wuhan and cities in northeast China, Beijing adopted a more targeted approach to limit movement amid the latest resurgence. The city applied different degrees of restrictions on people from different areas based on their risk level. Those from regions deemed highly risky will be banned from leaving the city or be required to take a nucleic test if they have to travel, according to the Beijing government.

Beijing listed one highly risky area and 27 others with mid-level risks Tuesday night.

All the recently confirmed cases in Beijing were linked to the Xinfadi market, indicating transmission among human contacts and through tainted products, said Chen Bei, deputy secretary-general of the Beijing municipal government, Tuesday night at a press conference.

Under the Level 2 emergency response, working from home is encouraged, while normal work and production will not be halted, Chen said.

Beijing reported the first new cases Thursday, breaking a streak of 55 days of zero cases. As new infections continued appearing, officials locked down 11 communities in the Fengtai district around the Xinfadi market and one in southwestern Fangshan district after infections were discovered among residents there, the city government said Monday on its website. Nearly a dozen food markets were also closed.

Shortly after the resurgence, Beijing requested all swimming pools and some indoor facilities to close.

The city of 20 million said it dispatched 100,000 community workers to knock on doors of residents and trace about 200,000 people who were exposed to the Xinfadi market. Beijing, with the capacity to test more than 90,000 people daily, tested more than 70,000 Sunday alone, city authorities said.

The trend of confirmed cases in the next few days will be crucial for determining the course of the outbreak, said Wu Zunyou, chief epidemiologist with China’s Centers for Disease Control and Prevention Monday night in a television interview.

“Those who have contracted the virus should display symptoms in around two days, and if cases aren’t surging by then, it’s safe to say the outbreak has basically stabilized,” Wu said. There have been no clear signs of family clusters or cross-infection between patients, Wu said.

Beijing lowered its emergency rating to level 3 from level 2 only 10 days ago. The city is now on the highest level of alert among all Chinese municipalities and provinces.