By Matthew Walsh and Zhang Fan 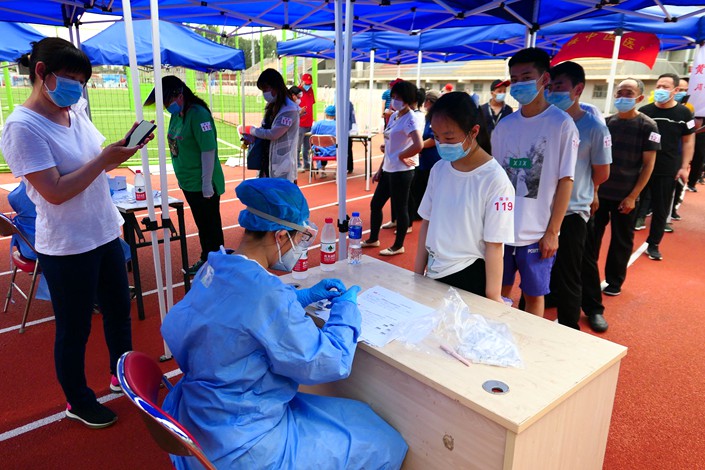 Residents line up for nucleic acid tests at a sports center in Beijing, June 17.

The China CDC’s chief epidemiologist defended his assertion that Beijing’s outbreak is “under control,” as other parts of China discovered infections linked to the food market at the center of the outbreak in the Chinese capital.

In an interview with China’s national broadcaster CCTV on Friday, Wu Zunyou said that his comments the previous day were “science-based.”

The capital had rolled out strict response measures that effectively blocked the virus’s transmission pathways, he said.

“But I hope this information doesn’t mislead people. We can’t afford to let our guard down or relax the restrictions,” he said, adding that it would be premature to lower Beijing’s emergency response level at this stage.

“Our work to contain (the epidemic) remains arduous, and the slightest let-up could cause the outbreak to spread rapidly,” he said.

Beijing reported 25 new cases of Covid-19 on Friday, four more than the previous day. Twenty-one of them are linked to the Xinfadi wholesale market in the southwest of the city and the other four remain under investigation, Pang Xinghuo, deputy director of the Beijing CDC, said during a press conference on Friday.

Some 183 Covid-19 patients have been admitted for treatment at the capital’s Ditan Hospital since last Thursday, prior to which Beijing had not recorded any new cases for nearly two months. Two are in a critical condition and 11 more are seriously unwell, Pang said.

Wu Binjie, deputy head of Beijing’s Changping district government, said at the same conference that one new confirmed case is an intensive care unit nurse who works at an international hospital affiliated with Peking University. The nurse is also a close contact of a previously confirmed patient. The hospital was immediately placed on lockdown when her illness was discovered, Wu said.

Several other provinces have registered rebounds (link in Chinese) in the number of infections since last week. The new cases all have ties to southwestern Beijing’s Xinfadi wholesale market and the surrounding area, leading to doubts about Wu’s comments.

North China’s Hebei province, which borders the capital, has logged more than a dozen new cases, according to data from the provincial health commission.

On Friday, the commission said (link in Chinese) in an online notice that two more people had been diagnosed with Covid-19. One regularly conducts business at the Beijing market, while the other works as a waiter in the district where the market is located.

In the northeastern province of Liaoning, three staff members of a meat products research center were found to have contracted Covid-19, the provincial health commission said (link in Chinese) Friday in an online statement. They had recently visited the area around the market on a business trip.

Pang Xinghuo, the deputy director of the Beijing Center for Disease Control and Prevention, said (link in Chinese) Thursday at a news conference that the capital had so far recorded eight so-called “cluster infections” with ties to the market.

In one instance, seven restaurant workers, including cooks, waiters and food procurers, all tested positive for the virus. While only one of them had gone to the market, they all lived and worked in close quarters, Pang said.

Wu said at the press conference that large quantities of the virus had been found at the market’s meat- and seafood-trading areas, Reuters reported Thursday.

A preliminary investigation showed low temperature and high humidity may have aided the pathogen’s survival in those parts of the market, he said.

Beijing also logged two additional suspected cases and two asymptomatic cases on Friday, the municipal health commission said in a notice (link in Chinese) on its website. Cumulatively, the city has recorded 603 cases of Covid-19 and nine deaths.

Overall, the Chinese mainland reported (link in Chinese) 32 new Covid-19 cases on Friday, according to the National Health Commission (NHC).