Editorial: Beijing Should Seek to Be Smarter, Not Stricter in Fight Against Covid-19 Flare-Up 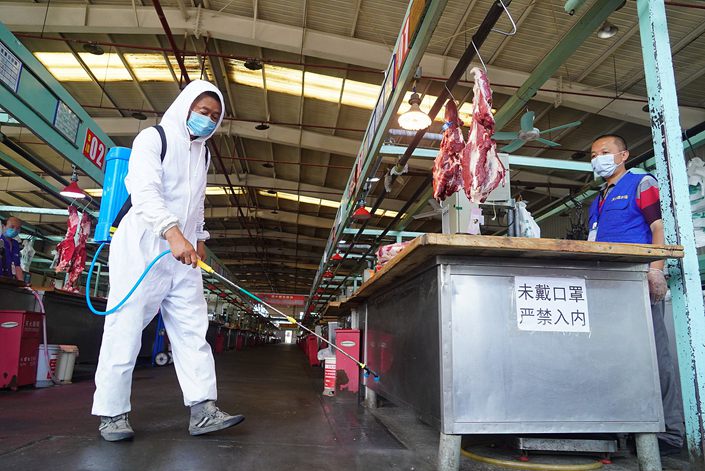 Beijing’s coronavirus cases have suddenly rebounded. After going more than 50 days without any new infections, the city reported a new confirmed case on June 11. Since then, more than 170 people have been found to have the virus.

As China’s capital, the resurgence rippled across the country and proved that the fight against the virus will be bitter and protracted.

Before humanity discovers effective methods of preventing Covid-19, we have no choice but to coexist with it. We must also adopt a rational attitude toward the virus based on the limits of our knowledge and capabilities.

Government officials, medical workers and the general public must recognize that while getting to zero cases is a praiseworthy target that can be approached through hard work, it will still be a difficult target to hit.

Of course, coexisting with the virus doesn’t mean we can relax our controls. On the contrary, only when we accept the long-term nature of the fight against the virus can we properly prepare for it.

As the epidemic changes, we need to make targeted adjustments to disease control policies. Following the significant strategic successes of the nationwide fight against the epidemic, our policies need to be strengthened and honed. Although they must be strict, it’s not a case of the stricter the better.

We must guard against the mentality that strictness is a question of attitude, while accuracy is a question of methods, and therefore it is better to be strict than accurate. We must see that any disease control measure comes at a social cost. Only when the policy is appropriate can we strike the right balance between economic development and disease control.

Living alongside the virus is also a prerequisite for getting the economy back to work. In the last six months, the world has seen the heavy economic and social price China has paid to control its epidemic.

Now, the country is engaged in the arduous task of recovery. As both central and local governments enacted a number of policies and businesses are fighting to save themselves, the whole country has recovered a level of economic vitality. We have fought hard to reach this point, and should take pride in the achievement.

The difficulty of partially reviving disease control measures sits uneasily alongside the nationwide push to reopen. Beijing’s decision to upgrade its threat level and the responses from other provinces are a significant test. We must be careful not to overreact and throw down obstacles to reopening.

We can’t lay a solid foundation for realizing this year’s employment, poverty alleviation, and socioeconomic targets unless we remain flexible about necessary control measures. Even if the virus also reemerges in other places, we must continue to push for restarting the economy on the condition of effective disease control.

Coexisting with the virus is also determined by the global nature of the pandemic. Currently, countries are locked in a stalemate with their outbreaks. The United States’ case numbers remain high, while Brazil and India are seeing rapid rises. Africa’s outbreaks appear to be spreading.

In today’s deeply globalized world, it simply isn’t realistic to try to avoid so-called imported cases by shutting out other countries. China was one of the earliest countries to bring its outbreak under control by enacting some of the world’s strictest policies, but Europe and North America have been more conservative.

The different methods make global action on the pandemic hard to coordinate. At present, the Chinese government has taken a tough approach toward imported cases. That must continue, but we should also recognize that this policy won’t ever get us to zero contacts and zero cases.

Recognizing that we must live with the virus over the long term is not the same as being overly negative. On the contrary, we must remain resolute in handling Beijing’s latest outbreak. Public awareness of disease control, the speed of government action, the cumulative experiences of medical workers, and stocks of medical resources are all in far better shape than they were at the beginning of China’s epidemic.

Beijing’s disease control center has concluded that we discovered the new wave of infections early. The first confirmed new case proactively admitted himself to hospital, and the capital then locked down Xinfadi, the wholesale market at the center of the outbreak, and enacted a series of targeted measures. Authorities reacted quickly and strongly, showing that the lessons from Wuhan have not fallen on deaf ears.

Going forward, Beijing must redouble its efforts to improve the scientific accuracy of its disease control measures.

Let’s take nucleic acid tests as an example. Since the capital raised its emergency response level, demand for the tests has risen dramatically. Although Beijing has 98 institutions with testing capabilities and can conduct tests on as many as 90,000 people a day, the number is far lower than the 400,000 people per day who can provide samples. That puts a lot of pressure on the testing process.

When megacities witness explosive demand for testing in such a short period of time, they are bound to bump up against the limits of their resources. Therefore, we must focus our work on those who need to be tested more than those who want to be tested.

At the same time, we must refine the testing requirements. In recent days, some citizens have complained that they have been forced into quarantine by big-data programs that have determined they traveled through the area around Xinfadi, even though they never entered the market. This is evidently a waste of already-scarce testing resources.

Photographs recently circulated online show that frontline testing personnel have been braving the sweltering summer heat to conduct their work in the open air, and sleeping on the ground in makeshift accommodation at night. The saddening images show that targeted testing also aids the performance of the medical workers proverbially fighting in the trenches.

Coexistence with the virus also helps to shape modern civic awareness. In the end, it falls to every citizen to put each disease control measure into practice. The epidemic is tightly bound up with the lives and health of all of us. We’re all part of the response and must remain resolute in our decisions not to congregate, to wear masks, and to carefully wash our hands. Protecting ourselves helps to protect our family members, friends and coworkers; when young people protect themselves, they also help the elderly and vulnerable.

Beijing’s coronavirus prevalence is still not as high as, say, Tokyo, which has already eased its health warnings. Faced with a rebound in the Chinese capital, we need not become panicked or pessimistic. It’s just that we’re moving into a new normal, one defined by coexistence with the virus.

On an individual level, we must take responsibility for ourselves and continuously improve our knowledge of how to guard against the disease. At the national level, a unified plan will ensure we continue to optimize our disease control strategy. When we also consider burgeoning technologies like vaccines, we know we can again emerge victorious from the epidemic’s counterpunch.