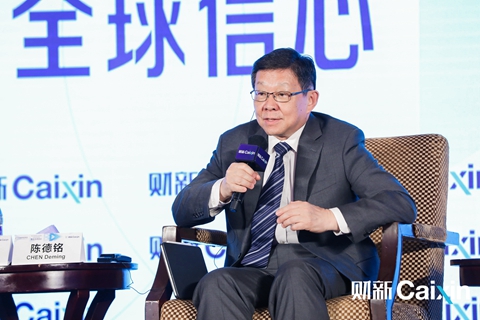 China is interested in joining the Asia-Pacific region’s 11-country trading bloc but before engaging in formal talks should test the waters with the two key stakeholders, Japan and the United States, said Chen Deming, China’s former commerce minister.

Chen made the comment Monday at a Caixin summer summit event in Beijing (link in Chinese) in response to a question about becoming a member of the Comprehensive and Progressive Agreement for Trans-Pacific Partnership (CPTPP).

“We have been keeping an open mind and also conducting studies [on joining in],” Chen said. He was China’s trade chief from 2007 to 2013.

Chinese Premier Li Keqiang made similar remarks in late May during the annual gathering of China’s top legislature, the National People’s Congress.

“We want to know more about how much Japan, the member country that drove [the completion of] the CPTPP, would welcome us; and also the attitude of the United States, the leading country of the CPTPP’s predecessor, the Trans-Pacific Partnership (TPP),” the former trade minister said. Beijing also needs to find out whether the U.S. would rejoin the mega-trade pact after its withdrawal in early 2017, he said.

U.S. President Donald Trump floated the idea of a possible return. About a month after the signing of the CPTPP in March 2018, Trump said on Twitter that the U.S. “would only join TPP if the deal were substantially better than deal offered to Pres. Obama.”

The TPP, with high standards on market liberalization, state-owned enterprises, labor unions and the environment, was regarded as the economic pillar of former U.S. President Barack Obama’s strategy of pivoting to Asia and countering China’s growing influence in the region.

American reengagement with the trading bloc could raise the bar for China to negotiate with the current 11 members of the CPTPP, including Japan, Canada and Australia.

Mike Froman, former U.S. trade representative who led U.S. negotiators on the TPP, also indicated in a Council on Foreign Relations event in 2016 in Washington that it was premature to discuss China’s joining.

“It’s not about containing China,” he said. “It’s about setting high standards. … It’s going to require China to up its game as well to be competitive. That’s in all of our interests.”

At the Caixin event in Beijing, Chen also said that as commerce minister he tested the waters with the U.S. side through a TPP member country’s trade minister.

“The response from the U.S. side was: China, the elephant in the room, should wait and join in after we [the 12 TPP member countries] conclude the talks,” he said. “If we let China in now, we could not finish the job.”