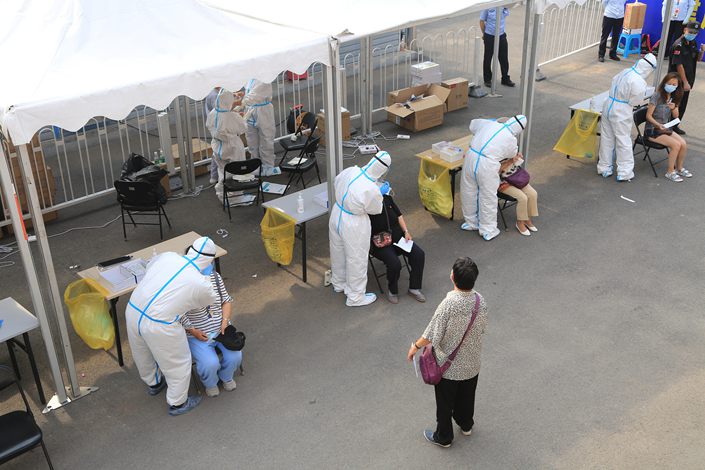 Residents of central Beijing get nucleic acid tests for Covid-19 on Sunday.

A food delivery driver who delivered an average of 50 orders per day was among the confirmed Covid-19 cases reported on Sunday in Beijing, the local health authority revealed on Tuesday, raising concerns about further spread of the disease in the Chinese capital.

Zeng Xiaopeng, director of the Beijing municipal center for disease prevention and control, said at a press conference that the patient was a 47-year-old who worked as a food deliveryman for the Alibaba Group Holding Ltd.-owned platform Ele.me.

Since Jun. 1, the driver had visited a number of restaurants, grocery stores and shopping malls across the south and east of the city. On Sunday, he was picked up by an ambulance and transferred to a hospital’s fever department for Covid-19 testing. He tested positive that day, according to Zeng.

The revelation came a day after the number of confirmed cases in Beijing declined to a single digits on Monday. Senior officials at the China CDC had claimed the sudden outbreak that first emerged about two weeks ago has been brought “under control.”

In a statement posted to its official Weibo microblog, Ele.me said that the company had begun testing all its Beijing delivery drivers for the coronavirus and quarantined those who had recently been in contact with the patient.

All newly registered delivery drivers must be tested prior to handling orders, the company said, adding that it had forwarded information about the patient’s recent movements to disease control agencies.

Meanwhile, several new Covid-19 cases identified in Beijing in recent days have no direct ties to either the wholesale market at the center of the outbreak or to other infected people, health officials said at a Monday press conference.

These uncertain transmission routes indicate that the 21 million-strong capital faces a complex battle to snuff out its recent virus flare-up even as the number of daily new infections remains on a downward trajectory.

“Although the positive trend is obvious, we must remain clear that the capital’s epidemic control situation remains serious and complicated,” said city government spokesperson Xu Hejian at the conference.

Beijing has reported 249 Covid-19 cases since June 11, including 13 on Tuesday, according to an online notice (link in Chinese) from the municipal health commission. That was up from nine the previous day. The infections have upended the city’s run of nearly two months without recording any daily new cases.

Speaking at the conference, Beijing Center for Disease Prevention and Control (CDC) Deputy Director Pang Xinghuo described four cases confirmed over the weekend that have no direct connection either to the city’s Xinfadi wholesale market or to other people known to have contracted the virus.

They include a husband-and-wife couple diagnosed with Covid-19 on Sunday who may have caught it at an address in western Beijing that four other patients are known to have visited. The wife, a 47-year-old from neighboring Hebei province, works at a nearby supermarket that shut down last week amid virus concerns, Pang said.

He added that two additional people in their 30s who were diagnosed on Sunday had both visited the same shopping mall in southern Beijing on separate days in the past three weeks. Both are natives of the capital.

The municipal health commission also said it had identified an additional two suspected cases and one asymptomatic case. According to official figures, Beijing has recorded more than 650 Covid-19 cases since the start of the pandemic, including nine deaths.

In an interview with state broadcaster CCTV on Monday, Feng Zijian, the deputy director of the national CDC, said Beijing’s flare-up was nearly over.

An analysis of the number of cases, the times of onset, and the sources of infection indicated that “the outbreak … is drawing to a conclusion,” Feng said.

The Chinese mainland added 22 new infections on Tuesday, according to an online notice (link in Chinese) from the National Health Commission (NHC).

The official nationwide case count stood at 85,070 as of Tuesday, according to the NHC. The death toll remained unchanged at 4,646.