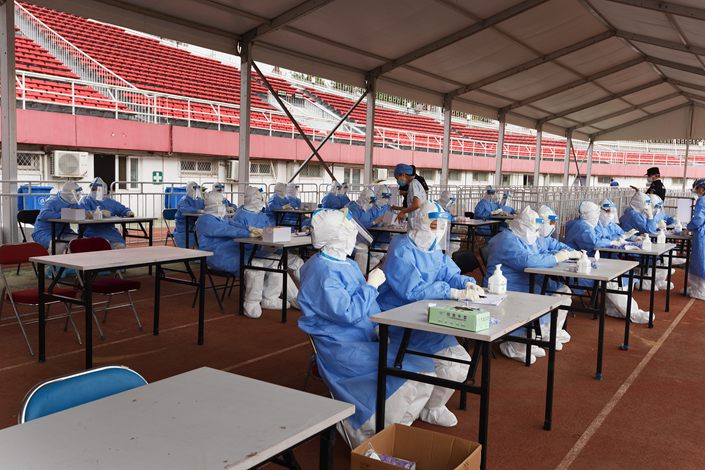 Fan Zhimin, the head of publicity at PepsiCo’s Greater China branch, said that upon discovering the cases, the factory immediately ceased operations, sealed off products, quarantined staff and disinfected the premises.

The number of new Covid-19 cases in Beijing fell to single figures Monday for the first time in more than a week, one day after an infection cluster at a PepsiCo Inc. factory emerged as a new hotspot in the city’s latest coronavirus outbreak.

The city’s disease control authority said at a Sunday press conference that a total of eight people at the plant in the southern Daxing district had tested positive for Covid-19 as of Saturday night. Two of them had recently been to the Xinfadi wholesale market in southwestern Beijing where the new wave of infections is believed to have begun.

Fan Zhimin, the head of publicity at PepsiCo’s Greater China branch, said at the press conference that upon discovering the cases, the factory immediately ceased operations, sealed off products, quarantined staff and disinfected the premises. Tests are underway to determine product safety, she added.

Beijing has recorded more than 200 new Covid-19 infections since June 11, following a nearly two-month stretch without any reported new cases. The resurgence has prompted authorities in the 21 million-strong capital to raise its emergency threat level, close off some residential compounds and restrict outbound travel. A handful of new infections linked to the wholesale market have also been logged in other Chinese cities and provinces.

In addition to its namesake cola products, U.S.-headquartered PepsiCo owns a number of well-known food and beverage brands, including Lays potato chips and Tropicana juices. Chinese public records show the company set up the factory in 2001 to make snack foods.

Fan said the factory shut down after the first case was confirmed last Monday. The following day, 480 workers went into quarantine and underwent coronavirus tests, all of which came back negative. By Saturday, authorities had also traced some 87 additional close contacts of staff members.

Disease control workers descended on the factory on Tuesday to take internal and external environmental samples, none of which tested positive for the virus, she said.

On Sunday, PepsiCo China said in a statement (link in Chinese) posted on its official Weibo microblog that no Covid-19 infections had been discovered at its cola canning and bottling plants in the country. Fan said at the conference that the Beijing cases were an isolated incident.

According to PepsiCo’s 2019 annual report, the so-called APAC region — comprising the Asia-Pacific, Australia and New Zealand, and China — generated 4% of the company’s total sales revenue last year, worth about $2.7 billion. The firm does not disclose separate figures for China.

Beijing announced nine new coronavirus cases on Monday, a decline of 13 from the day before and the first time new infections in the city have dropped below 10 since June 13. The capital also recorded two more suspected cases and five asymptomatic cases, according to an online notice (link in Chinese) by the municipal health commission.

Zhang Wenhong, the high-profile director of the infectious diseases department at Shanghai’s Huashan Hospital, said Monday at the Caixin Summer Summit in Beijing that the capital’s falling daily case numbers are an “extremely important signal” that the authorities’ rapid, targeted disease control measures are working.

Beijing’s efforts could serve as an “exceptionally good model” for other parts of China seeking to reduce the impact of future virus outbreaks on the general population to nearly imperceptible levels while maintaining normal amounts of economic activity, he said (link in Chinese).

“Targeted epidemic resistance will become the key refrain of the whole country’s fight against the virus and provide the basis for ensuring the economy doesn’t die when the government steps in to manage things,” Zhang said.

The Chinese mainland added 18 new cases on Monday, 11 of which were locally transmitted, according to an online statement (link in Chinese) from the National Health Commission (NHC).