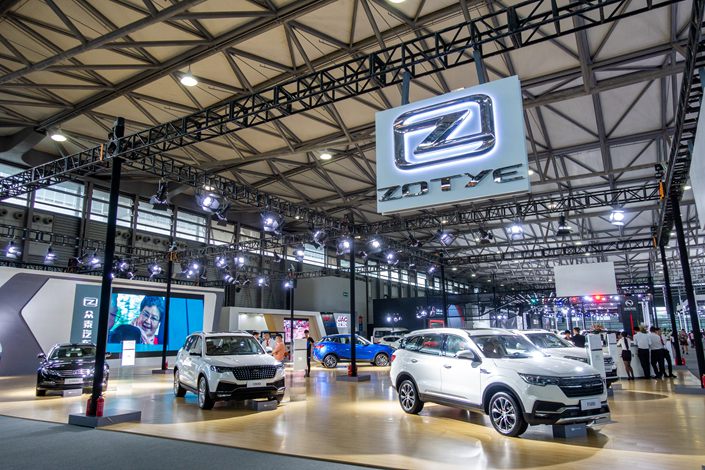 Zotye Automobile Co. Ltd., which made global headlines in 2017 after being named Ford Motor Co.’s new energy vehicle (NEV) partner in China, is now on the cusp of collapse, the victim of shifting political policies that have pulled the rug out from under the bloated sector.

Zotye’s woes have many of their own special characteristics, including poor accounting and internal control practices that led its auditor, Baker Tilly China, to publish a “disclaimer of opinion” on Monday, due to its inability to evaluate the company’s financial statements. But the company’s troubles are also part of a broader industry shakeup now gripping China’s NEV sector, which feasted for years on strong government support, only to lose much of it over the last two years.

Zotye on Monday released its 2019 annual results, revealing a massive 11.2 billion yuan loss ($1.6 billion) for the year, a sharp reversal from the company’s 800 million yuan profit for 2018, as it recorded massive write-downs partly tied to a goodwill impairment. Its revenue for the year plunged to about 3 billion yuan, around one-fifth the amount a year earlier.

The Baker Tilly China report published the same day pointed out that Zotye has halted production and that its suppliers have filed suits after failing to get paid on time. It added that the company was failing to pay employees on time, and that Zotye’s bank accounts had been frozen, signaling uncertainty about the company’s ability to remain in business.

Based on stock market rules, the Shenzhen Stock Exchange launched a “danger of delisting” action that included the addition of the “ST,” or “special treatment,” prefix before the company’s name.

At the heart of Zotye’s woes is the rapid downturn in China’s NEV market, which has been slumping since Beijing sharply scaled back government subsidies for car buyers in the middle of last year. But even before that, manufacturers like Zotye were already beginning to come under fire after Beijing eliminated previous company-focused subsidies aimed at building up the space. Many of those subsidies were abused and resulted in a flood of mediocre products using old technology.

As the subsidies were retired, NEV sales for all China fell from a peak of 1.3 million in 2018 to about 1 million last year, according to a recent report from AlixPartners. The market isn’t expected to return to 2018 levels for another two years, as a newer generation of higher-performance cars emerges and the sector consolidates around companies like U.S. giant Tesla Inc. and China’s own BYD Co. Ltd., which is backed by billionaire investor Warren Buffett.

Zotye was a classic case of a company that thrived on government subsidies, taking advantage of tax incentives for low-emission cars in the mid-2010s before adding NEVs when that sector started receiving government largess. The company went public in 2017 through a backdoor listing using a shell company on the Shenzhen Stock Exchange.

In August that year Zotye made global headlines when it announced it would set up an NEV joint venture with Ford, amid a string of similar tie-ups between Western giants and local Chinese NEV partners. The big Western names were driven by looming Chinese rules that were set to require all car makers to get a certain portion of their sales from new energy models over the next few years.

But despite the fanfare, the announced joint venture was never finalized, and as late as last October Ford issued a statement saying there was “no new progress” on the tie-up.

Zotye failed to meet those targets for the last three years of the deal. The Baker Tilly report pointed out that Zotye had yet to receive promised compensation for 2018, and that Baker Tilly failed to find sufficient evidence regarding the recoverability of that and other outstanding compensation due from Tech-New Group.

To ease its capital crunch, Zotye pleaded for assistance from several local government agencies. Those efforts bore fruit when three local government entities gave it 3 billion yuan in bailout funds last year. As the company continued to lose money, it launched another plan this year to apply to banks for a revolving credit line of up to 7.55 billion yuan.

The last straw was the ongoing Covid-19 outbreak, which saw Zotye sell just 3,573 cars in the first five months of the year. It previously reported a loss of 419 million yuan in this year’s first quarter.