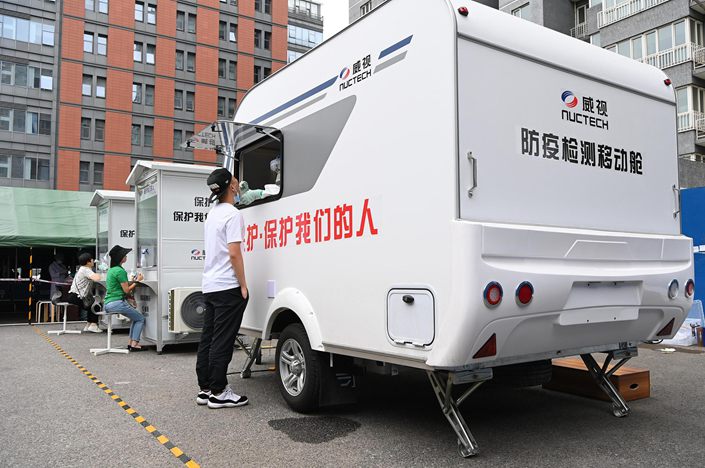 Beijing health authorities have stepped up testing efforts to identify false negatives from Covid-19 tests after a woman tested negative four times before her infection was finally confirmed.

Pang Xinghuo, a deputy director of the Beijing municipal center for disease prevention and control, said at a press conference Thursday that the 60-year-old patient had tested negative for Covid-19 on four nucleic acid tests, sampled via throat swab, during the first week of her hospitalization that started June 16.

Pang said the patient, one of the 13 new confirmed Covid-19 cases reported on Thursday, finally tested positive on Wednesday.

On June 3, the patient visited the Xinfadi market, where the latest flare-up of the virus in the Chinese capital emerged. On June 14, she was quarantined as a close contact of a confirmed case. On June 16, she developed symptoms and was transferred to a hospital, according to Pang.

The revelation came as the city launched an enormous targeted effort to test specific categories of its residents, including those with links to the Xinfadi market, those who live in areas at risk of exposure to confirmed cases, and those working in service industries such as food delivery or restaurants.

As of Thursday, 269 new Covid-19 patients have been discovered and more than 2 million residents have been tested in Beijing. An absolute majority of the confirmed cases have been linked to the Xinfadi market, according to Beijing health commission.

Wang Guiqiang, a director of the infectious disease department at the No. 1 Hospital affiliated with the Peking University, said at the same press conference that false negative results from nucleic acid tests can sometimes happen due to invalid sampling in the process.

Wang said that Beijing has adopted a so-called “1+3” model to prevent false negatives, which means a patient at the fever clinic will be subject to a nucleic acid test and three additional tests — a serological antibody test, an imageological diagnosis and a blood test. “This will further reduce the risk of a missed diagnosis so that the disease can be contained effectively,” he said.

Zhang Boli, an academician at the Chinese Academy of Engineering who is also a physician specializing in traditional Chinese medicine, told the Health Times, a newspaper affiliated with the People’s Daily, that the spread of the outbreak in Beijing has been largely contained.

He estimated that the number of Covid-19 cases will fall to single digits at the end of June, and the city will be free of coronavirus cases in July.