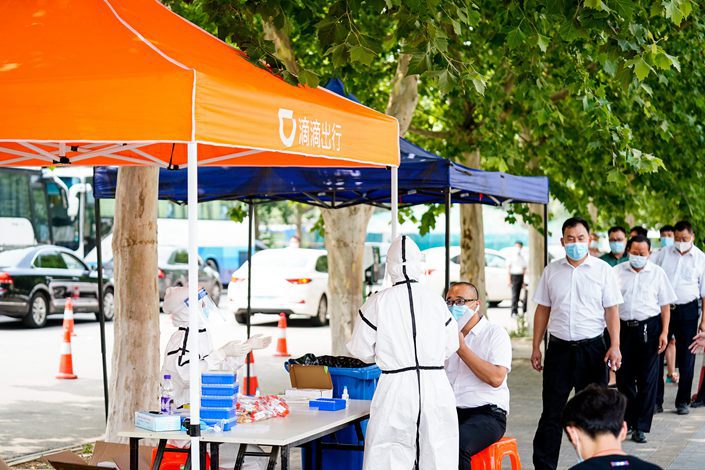 The official in charge of the Xinfadi wholesale market’s disease control has been fired, and two others in similar roles were demoted.

China’s Vice Premier Sun Chunlan has urged greater efforts to contain the spread of Beijing’s new coronavirus outbreak, after three officials in the district that recorded the first infections were punished for disease control failures.

“By closing off affected areas and tracing and isolating close contacts (of infected people), the outbreak directly linked to the Xinfadi wholesale market has basically been brought under control,” Sun said during a Tuesday inspection, referring to the ground zero of the new epidemic. “But we have discovered infection clusters among families and work units as well as scattered community infections, so we cannot afford to let down our guard in the slightest.”

Sun urged health personnel to exercise renewed rigor as they trace and test hundreds of thousands of people in affected communities and isolate suspected cases for treatment, the official Xinhua News Agency reported.

The measures will help “recover normal production, life and order as quickly as possible,” Sun said.

At the start of the month, Beijing was on a nearly two-month run of zero daily new Covid-19 cases. That changed on June 11, when the 21 million-strong city reported an infection linked to the Xinfadi wholesale market in the southwestern suburb of Fengtai. Since then, Beijing has logged more than 250 new infections and raised its official emergency response level.

On Wednesday, the Beijing Municipal Committee for Discipline Inspection — the city’s internal Communist Party watchdog — said in a statement (link in Chinese) on its website that it had punished three Fengtai government officials for failing to sustain adequate disease controls at the Xinfadi market following Beijing’s initial coronavirus outbreak earlier this year.

An investigation by the committee found the officials had not “normalized” epidemic prevention at the market in the weeks leading up to the new outbreak and had become lax in conducting temperature checks, encouraging people to wear face masks, and disinfecting the premises, the statement said.

As a result, the official in charge of the market’s disease control has been fired, according to the statement. Two others in similar roles were demoted.

Beijing reported seven new Covid-19 cases on Wednesday, six fewer than the day before and the lowest figure since June 13, according to an online notice (link in Chinese) by the municipal health commission. The city also logged an additional four suspected cases and one asymptomatic infection.

The previous day, the capital confirmed another four cases linked to a cluster at a PepsiCo Inc. factory in the southern Daxing district, bringing the total number there to 12.

More than 650 Covid-19 cases have been reported in the city since the pandemic started, according to municipal health commission disclosures.

The Chinese mainland added 12 new Covid-19 cases on Wednesday, according to an online statement (link in Chinese) by the National Health Commission (NHC).