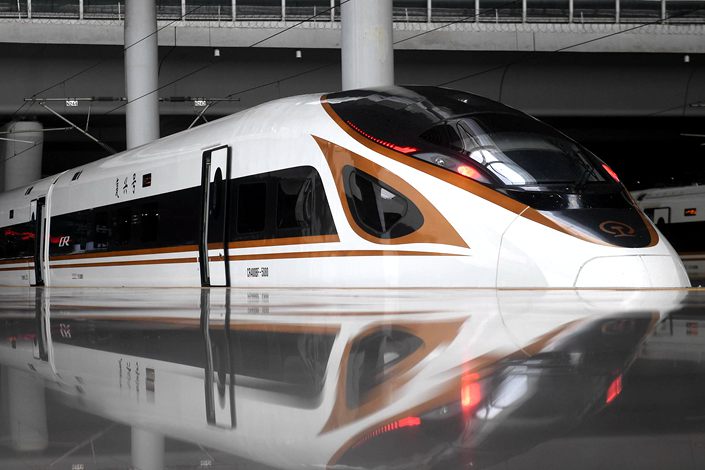 The Shangqiu-Hefei-Hangzhou high-speed rail line passed a milestone on Sunday when it began service on the final 309-kilometer section connecting Hefei, capital of Anhui province, and the city of Huzhou in adjacent Zhejiang province.

The newly listed owner of the lucrative Beijing-Shanghai high-speed rail line has launched service on a recently-acquired, lesser-used line in Anhui province, as part of the national rail operator’s plan to tap financial markets to pay down its massive debt.

China State Railway Group Co. Ltd. (CR Group) has spent the last decade building a national high-speed rail network with more than 29,000 kilometers of track costing hundreds of billions of dollars. In a fledgling move to help pay down some of that debt with public money, it raised 30.7 billion yuan ($4.3 billion) in January by making a Shanghai IPO for the operator of one of its most lucrative lines, Beijing-Shanghai High-Speed Railway Co.

The newly listed company made immediate use of its IPO proceeds by putting them towards the roughly 53 billion yuan it had agreed to pay for 65% of the operator of Anhui province-based sections of the Shangqiu-Hefei-Hangzhou high-speed rail line.

That line has gone into operation in stages, and passed a milestone on Sunday when service was officially running on the final 309-kilometer section connecting Hefei, capital of Anhui province, and the city of Huzhou in adjacent Zhejiang province. Trains traveling on that section of the line are designed to go at speeds of up to 350 kilometers per hour.

The line’s other main section, connecting Hefei with the city of Shangqiu to the northwest, in adjacent Henan province, began operating last December. Construction on the entire project began in 2015, with a total investment of 96 billion yuan for nearly 800 kilometers of track.

At the time of its IPO in January, Beijing-Shanghai High-Speed Railway stated it planned to put all of the 30.7 billion yuan raised from the listing towards the 65% stake in the owner the Anhui assets of the Shangqiu-Hefei-Hangzhou line. It still owes another 22.1 billion yuan for the purchase, according to records from the end of March, and will pay the balance in accordance with a previously agreed schedule.

Many such new lines experience losses in their early stages as they gather operating experience with relatively limited volume. In the first three quarters of last year, the owner of the entire Shangqiu-Hefei-Hangzhou line posted a net loss of 884 million yuan. Its other major assets include a line connecting Hefei with the southern city of Fuzhou, which has been operating four years; and a line connecting the Anhui cities of Bengbu and Hefei, which has been operating for seven years.

The January IPO was part of CR Group’s broader plan to overhaul its corporate structure and monetize some of its assets as it seeks to become more commercial, including paying down its debt. At the rail operator’s annual work meeting in January, Chairman Lu Dongfu emphasized that the company will continue similar efforts for some of its other units, which includes a goal of making more eventual IPOs.