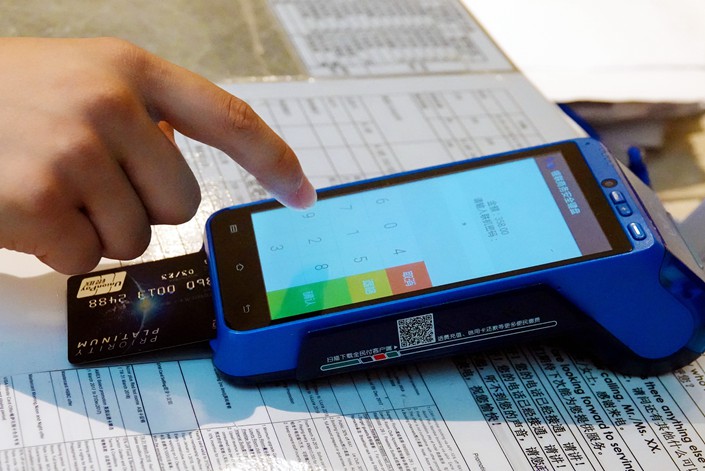 An illicit business that has become a lifeline to many of Alipay and WeChat Pay’s smaller peers has again caught the attention of regulators for contributing to China’s ballooning credit card debt, a problem that has only grown worse amid the economic strain caused by the Covid-19 pandemic.

The business, known in China as “cash-out services,” allows individuals and businesses to tap their credit cards for cash advances at costs far lower than normal.

Some third-party payment companies or their agents make this happen by giving merchants the capability to disguise these transactions as phony credit card purchases, taking advantage of the fact that banks charge lower fees for purchasing merchandise or services than they do for borrowing straight cash.

In the past few years, cash-out services contributed about 1 trillion yuan ($141.4 billion) to 2 trillion yuan of China’s payment market — that’s equal to 2.5% to 5% of domestic credit card transactions in 2019, according to estimates by multiple sources in the industry.

The size of the business could help explain why the People’s Bank of China (PBOC) last month released draft regulations (link in Chinese) that urged banks and third-party payment companies to tighten supervision over credit and debit card transactions.

A look at the inner workings of the cash-out business helps shed light on how third-party payment companies and some complicit merchants have taken advantage of regulatory loopholes to become a significant force behind China’s rising tide of credit card debt, a growing portion of which has soured during the pandemic. At the end of March, total credit card balances at least six months overdue reached nearly 91.9 billion yuan, up 23.7% from the end of last year, according to central bank data. The total was the second highest figure since the data series began in 2008.

Some bankers are alarmed. “The risks will begin to threaten the financial system if 10% of cardholders who use cash-out services become high-risk clients who fail to repay their debts even after using new loans to pay old ones,” an employee of a joint-stock bank told Caixin. “At the national level, the government must fix the cash-out businesses to stop it from growing further.”

Cashing in on cash-out

Currently, there are more than 230 companies (link in Chinese) in China licensed by the central bank to run third-party payment businesses, which include a vast array of services such as online payments, mobile phone payments and processing bank card transactions for merchants. Among them, only 62 are qualified to process bank card payments, effectively serving as middlemen between cardholders and businesses.

The problem for most of them is that the country’s most successful and well-known payment companies — Alipay.com Co. Ltd., an affiliate of Alibaba Group Holding Ltd., and Tenpay Payment Technology Co. Ltd., a Tencent Holdings Ltd. subsidiary which runs WeChat Pay — have a stranglehold on the online payments business. By transaction value, the two together dominates more than 90% (link in Chinese) of all third-party payment companies’ mobile payment market. In China, people have grown accustomed to making the vast majority of their payments through two mobile apps — Alipay and WeChat — instead of credit cards. The situation has left many other third-party payment companies with few ways to make money.

Handling offline credit and debit card transactions for merchants is one option, but it’s a tough business. The average service fee per transaction in China is only about one-third to half of that in some other countries, which makes it hard for payment companies to make a profit, said Chen Qizhang, a senior industry insider. Moreover, payment companies only hold on to about 20% of the total service fee they charge for each transaction. They have to pass on the rest to China UnionPay Co. Ltd., the only domestic bank-card clearing institution, which takes about 10%, and the bank that issued the card, which receives the remaining 70% or so.

However, credit cards do have one advantage over the apps in that they allow both individuals and businesses to take out cash. With few lucrative business opportunities, many other third-party payment companies have turned to cash-out services.

Most of the 62 third-party payment companies qualified to process bank card payments run a cash-out service, which accounts for at least 70% of their total offline payment transactions, according to multiple industry sources. “Most payment institutions couldn’t have survived if they just ran legitimate businesses, but they have made a good living running an illicit one — the cash-out service,” one source told Caixin.

How does it work?

In the cash-out business, third-party payment companies make their money from the service fees they charge a merchant every time a cardholder makes a “purchase.” The payment companies have an incentive to see merchants make as many of these transactions as possible, since they get paid for each one.

For the cash-out service to work, the merchants have to be complicit because any sale exists only to disguise the transaction. No goods or services change hands. With a simple swipe on a point-of-sale (POS) machine provided by a third-party payment company, a cardholder walks away with cash in hand and a charge by the merchant.

This is actually an old game in China. For years, merchants have been misclassifying credit and debit card charges, so they can keep a greater portion of services fees for themselves. In the first half of 2014, UnionPay found that nearly 470,000 merchants had problems including hiding the true purpose of transactions in order to reduce service fees they passed on to UnionPay and the banks, according to a report it released that same year. And about 77% of those transactions came from merchants working with third-party payment companies.

Although merchants play a part in the cash-out business, they aren’t necessary for it to work. Payment companies or their agents can use fake merchant information to apply for POS machines on behalf of individuals and small businesses that otherwise do not qualify to accept card payments, Caixin reported previously. In 2014, local media in Shandong and Hebei provinces reported that the agents of many third-party payment companies were offering to install POS machines for anyone who could present valid identification and a bank card. All other necessary documents could be forged by the agent companies.

Payment companies continue to provide this service to people and businesses that don’t qualify to get a POS machine, a convenience store owner in South China’s Guangdong province told Caixin on Saturday. Some businesses will then offer cash-out services to their customers, through which they are making extra money, the person said.

It looks like the PBOC had the practice of forging merchant information in mind when it came up with its latest draft regulations for ensuring the authenticity of bank card transactions. The regulations require payment companies to submit binding information such as a merchant’s ID number and its business owner’s ID number when they install a POS machine.

The cash-out business is especially risky not only because it provides businesses and individuals with access to cheap cash loans, but because borrowers can theoretically avoid paying them back indefinitely.

It has become a common practice for cash-out customers to pay off the balance on one credit card with cash borrowed from another. With multiple cards, they can borrow even more, rolling over their debts from one card to another. In one of the most extreme cases, a man in the eastern province of Shandong cashed out more than 10 million yuan from some 280 credit cards through more than 10 POS machines from late 2017 to early 2019, local official media reported (link in Chinese), citing police. Some of the cards belonged to others.

With a POS machine of their own, any individual or small business could tap their own credit cards for cash advances without having to deal with a merchant. Over the last few years, the cash-out service has become a popular way for small businesses to get access to credit as economic growth has slowed and obtaining loans from banks and financial institutions has become harder, sources in the payment industry said.

In March, Lakala Payment Co. Ltd. and Shenzhen RYX Infotech Co. Ltd., believed to be two leading players in the business, racked up more than 81 million yuan and 63 million yuan in profits respectively from offline payment transactions, the highest among their peers, according to a payment institution’s internal research note that was seen by Caixin.

Even as the coronavirus epidemic played havoc with China’s economy and sent brick-and-mortar retail revenue into a tailspin, RYX’s offline transactions remained stable over the first three months of the year, according to UnionPay data seen by Caixin.

All of this poses a problem for banks. As the ultimate holders of the credit card debt generated by the cash-out business, they have a lot to lose if the businesses and individuals who use the service eventually stop paying off their balances. That should give them an incentive to keep a close eye on the credit card transactions coming from third-party payment companies.

For the last few years, however, they have often turned a blind eye to the business. Several bankers told Caixin that banks tend to ease off oversight when their credit card businesses are struggling to meet revenue targets.

“For banks, it’s a headache,” a banker said.