For Electric-Vehicle Maker Nio, Government Tie-Up Has Its Benefits 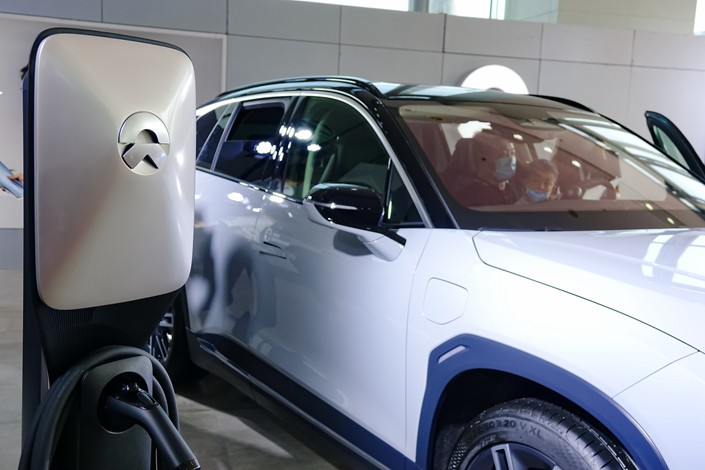 A Nio electric vehicle sits on display on June 25 at an auto show in Qingdao, East China's Shandong province.

Chinese electric-car maker Nio Inc. said it had secured credit lines worth 10.4 billion yuan ($1.48 billion) from six domestic banks, just months after inking a cooperation deal with a city government, as the company hunts for funding amid concerns of tightening liquidity.

The lenders are all branches of national state-owned commercial banks based in East China’s Anhui province, including China Construction Bank Corp., Industrial and Commercial Bank of China Ltd., and Bank of China Ltd. Nio signed an agreement with them on Friday and will receive the credit line via its subsidiary Nio China, the company said in a statement.

Nio’s announcement of new access to funds may allay shareholders’ worries about its liquidity. The New York-listed Chinese company lost about $1.6 billion in 2019 and had $151.7 million in cash, equivalents and short-term investments left at the end of the year. It said in March it may not have liquidity to survive another 12 months.

In February, Shanghai-based Nio was offered a lifeline by Hefei, Anhui’s provincial capital, after authorities there agreed to financially support the carmaker if it set up a new China headquarters in the city.

In late April, Nio announced that it had struck a deal for a 7 billion yuan investment from entities led by the Hefei government. As part of the deal, Nio would transfer its core assets and businesses in China to a new Hefei-based company, of which the new investors would take a 24.1% stake. Nio would own the rest of the company, called Nio China, and would inject 4.26 billion yuan of cash into it.

Founded in 2014, Nio produces vehicles in Hefei in partnership with the state-owned Anhui Jianghuai Automobile Group Holdings Ltd. Nio Chairman William Li on Friday thanked the Hefei government for its support and its efforts to develop the new-energy vehicle industry, making it possible for the company to reach deals with local bank branches.

Earlier this month, Nio got another lift after the company announced it had delivered a record 10,331 vehicles in the three months from April to June – a quarterly record for the firm. Spurred by that news, its shares in New York rose by nearly 20%.

Bloomberg contributed to the report