Opinion: How China Is Turning Covid-19 Adversity Into Market Opportunity

By Markus Herrmann and Jost Wübbeke 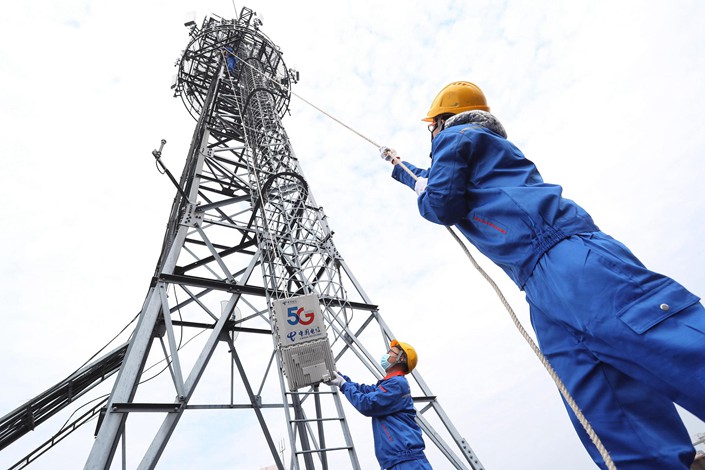 China Telecom workers install a 5G base station in Shanghai on Feb. 21.

In his 2020 government report, Premier Li Keqiang clearly signaled that China is facing unprecedented challenges. The government would not set a growth target for 2020 because “China’s development is facing some impact factors that are difficult to predict.” This statement shows that China’s leadership is highly alerted and aware of the tremendous challenges ahead.

Yet, the leadership is also convinced that Covid-19 will not stop China’s economic rise.

Li said: “If we directly tackle the challenges … and utilize the period of strategic opportunity for our country’s development, we will certainly overcome these difficulties.”

To further advance the vision of an economic and innovation superpower, China is adopting a strategic crisis management approach. In addition to generating short-term growth, economic policies and stimulus measures will also serve long-term goals.

This reflects the belief that China can make use of the crisis and has a chance to win the upper hand in hegemonic competition and technological progress. Drawing on the experience of the 2008 financial crisis, Beijing fully understands that a worldwide crisis can shift the global economic power balance. This is an opportunity for China, as its economy is slowly getting back to work.

China’s leadership believes the current economic and industrial policy system is well suited to achieve these ambitions. Covid-19 is no reason to initiate any systemic shifts, such as transitioning toward a free market economy, major SOE privatization or a structurally improved level-playing field for foreign companies. Rather, China’s strategic crisis management is reinforcing and accelerating existing policy directions.

China’s policy and stimulus measures are currently taking place on many levels: support for SMEs, monetary easing, consumer vouchers, employment, and social security measures, and so on.

In this article, we focus on five areas characteristic of China’s strategic crisis management with a clear impact on foreign companies:

China’s long-term strategy can especially be seen in the infrastructure stimulus. The current measures still focus very much on “traditional” infrastructure as a proven element of China’s policy toolbox.

However, by coining the term “new infrastructure” the strategic crisis management also closely links the infrastructure stimulus with China’s long-term plans. Its exact scope is still unclear – various definitions include 5G, electric vehicle charging and data centers. The innovative turn is that it does not only consider physical infrastructure. The plan also focuses on software “infrastructure” for new digital applications, such as AI. Ideally, the stimulus will generate growth and accelerate the rollout of innovative technologies.

Taking 5G as an example, new policies have intensified these efforts over recent months. An MIIT policy promotes construction of 5G base stations and various provinces have announced ambitious investments to boost the technology. If these plans are realized, by 2025, China could have 4.6 million base stations, 600,000 more than in pre-pandemic estimates. A faster deployment of 5G will mean faster adoption of business models using 5G, such as smart city solutions and autonomous driving.

The effectiveness of the stimulus, however, is not yet clear. Infrastructure investments now generate less growth than back in 2008. “New infrastructure” represents only about 10-15% of total infrastructure investment. Fast roll-out can cause quality problems. Local governments such as Guangdong have increased local debt by issuing special-purpose bonds and others are planning to do so.

2. Companies need to operate in a highly dynamic policy environment

In addition to infrastructure stimulus, the strategic crisis management triggered a highly dynamic policy situation. New policies and regulations are coming out at a high speed, in some cases resolving previous policy deadlocks. Within days, the government is taking decisions that substantially affect entire industries.

A case in point is the dynamic in the automotive industry. In early February, the standing committee of the Politburo decided to support the car industry, with two major consequences:

First, the government extended the purchase subsidy for electric vehicles until end of 2022. The subsidies were originally to be phased out by end-2020. In 2019, however, a partial rollback of subsidies had already brought about a steep decline in sales. Now, as Covid-19 kicked in, extending the subsidies was a natural option. However, the subsidies suddenly set new strict requirements, such as a minimum e-range of 300km. Vehicles would only be subsidized up to 300,000 yuan.

The speed at which the decision was taken did not leave much time to react. Those not meeting the requirements will be disadvantaged compared to their competitors. Tesla, for instance, decided to decrease the price of its Model 3 Sedan to qualify for subsidies.

Second, the government extended the transition period for complying with the China 6 emission standard. As the standard creates significant pressure to reduce vehicle emissions, this step brings some relief for automotive companies.

These two cases in the automotive industry show that for Chinese and foreign companies, Covid-19 means more uncertainty and surprises. In some cases, there have been clear negative impacts on business, but in others they can be positive.

While the CSCS has proven its effectiveness as a tool able to respond to newly emerged and comprehensive market steering needs, this accomplishment falls under the broader trend of the Chinese government’s rapidly improving regulatory capacity.

We predict that this capacity will accelerate foreign market access. Shanghai Municipality’s recent acknowledgment that 20% of employment, 27% of GDP and 33% of tax revenues are contributed by foreign companies is a timely reminder of the importance of foreign investors for the Chinese market. In recent years, many foreign equity restrictions have been slashed and more relaxations announced, but an even faster and more comprehensive revision of the negative list both at a national level and for FTZs can be expected.

This dynamism will also spill over to a more consequential implementation of recent policies to improve the business environment. However, fundamental behind-the-border challenges for foreign companies will not disappear, such as access to licenses and public procurement.

At a technological level, Covid-19 will also cause faster decoupling. For many years, the Made in China 2025 strategy has been calling to increase self-sufficiency and to replace foreign technology with Chinese versions. With new rules for “secure and controllable” products and the 3-5-2 policy, China is pushing an agenda for using domestic products. This has been further reinforced by the U.S.-China trade war and the export ban on a dozen Chinese tech companies.

Firstly, after some relaxation in January, a spiral of mutual recriminations has led to further deterioration in U.S.-China relations. That the U.S. president would even consider cutting diplomatic ties with China or countenance the possibility of a “Cold War 1.5” further pushes the technological divide into two different economic and technological ecosystems.

Secondly, as Covid-19 has revealed the vulnerability of global supply chains, we see an initial trend towards the localization of manufacturing. In Europe, the discussion revolves very much around the production of pharmaceuticals and medical equipment at home. In China, calls for localizing production are also intensifying. As production is ramping up again in China, the country faces supply shortages of core components from abroad.

Decoupling is visible in many efforts. Huawei is developing its own Harmony OS as an alternative to Android. Huawei subsidiary HiSilicon will start to source systems-on-a-chip (SoC) from the mainland foundry SMIC. According to unverified media reports, its original supplier, the Taiwanese TSMC, may have to stop sales to Huawei to comply with the U.S. trade ban. On another note, domestic automakers are starting to source more from domestic suppliers as prices of imported parts rise due to Covid-19.

At the same time, however, decoupling has its limits on the Chinese side. Replacing foreign technology is easier in some industries, such as railways, than in others, such as semiconductors. Although there have been some achievements in chip production, China has fallen behind cutting-edge chip design in the U.S. Chinese chipmakers account for only roughly 6% of the domestic market, far away from the 2025 target of 70%.

For companies doing business in China, Europe, and the U.S., accelerated decoupling means they must operate in increasingly separate technology ecosystems that are more and more disconnected. Choosing one of the two can lead to being excluded from the other. Catering to both systems will increase costs of adaptation.

While self-sufficiency policy addresses the U.S.-China technology decoupling, China is further confronted with a fracturing global trading system. Despite reaching a fragile “ceasefire” in January, the Chinese economy has suffered from trade diversions caused by the U.S.-China trade war.

The Covid-19 health crisis adds two dimensions: one, an international demand disruption with unclear recovery period, and two, calls from European and Japanese leaders for less supply chain dependence on China, and in some cases, for reshoring of critical supplies, such as vaccines. In response to this challenging trade environment, we expect the Chinese leadership to reinforce three priorities.

A top priority will be a quick signing of the Regional Comprehensive Economic Partnership (RCEP), as evidenced by a recent MOFCOM statement in March 2020. Aside from the geopolitical value of counterbalancing the CPTPP, signing the RCEP will strengthen China’s trade relations with ASEAN, which in Q1 2020 emerged for the first time as China’s largest trading partner. It will also help to consolidate existing value chains in the face of calls for diversification.

Thirdly, another policy direction we expect – inferring from a recent Politburo meeting – is China’s efforts to regionalize its own industrial supply chains for more secure and resilient supply. Thereby, China will focus on trading partners in economies participating in the Belt and Road Initiative (BRI) that feature solid political trust and alignment on trade rules – with an actual “Sino-centric trading community” taking clearer shape.

To support these priorities, we further expect the BRI to scale back its connectivity programs from far-flung Latin America, the politically instable Middle East, and from Central Asia due to its underdeveloped manufacturing capacities, and reinforce its focus on ASEAN.

6. Key implications for the post-Covid-19 era for foreign corporates

First, the high dynamic of new policies and regulations exposes foreign enterprises to additional risk. Detailed assessment of these dynamics will be key to successful operation in the Chinese market.

Second, the disruptions of global trade and China’s policy response will require corporate boards to review their strategic footprint in the Asia Pacific region.