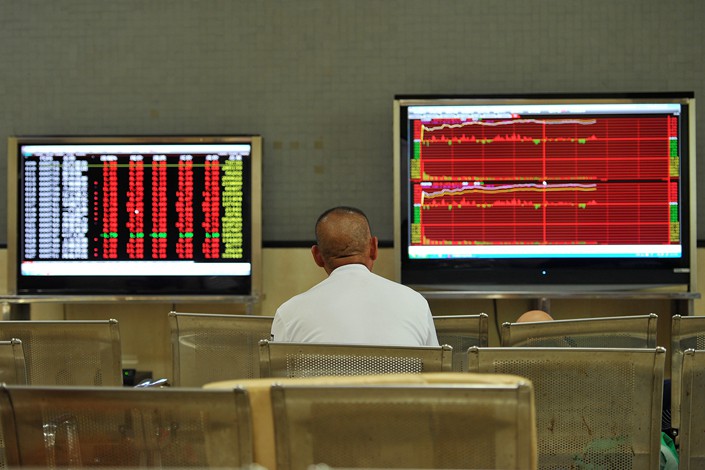 Analysts have attributed the equities rally to the loose monetary conditions at home and abroad and confidence about the recovery of the Chinese economy from the Covid-19 pandemic.

As fear of missing out on China’s stock market bull run triggers a stampede of small investors into equity trading, financial regulators are struggling to stamp out illegal margin trading that’s allowing them to bet on shares with borrowed money.

On Wednesday, the China Securities Regulatory Commission (CSRC) named and shamed 258 financial institutions that are illegally providing financing for margin trading and told investors to stay away from them. Some platforms are allowing investors to borrow over 1,000 yuan ($142.8) to buy stocks for a deposit of as little as 100 yuan, a leverage of 10 times.

A source close to financial regulators told Caixin that the authorities have closed some platforms, and others have been put under criminal investigation. Yet many are still operating and the commission’s warning only serves to highlight shortcomings in the country’s regulatory system that are contributing to a buildup of financial risks.

Although the CSRC is responsible for oversight of the stock market and the companies under its jurisdiction who are licensed by it, the commission has no supervisory authority over thousands of other small financial institutions who fall under the purview of local governments. That means the CSRC has limited firepower to crack down on illegal securities trading.

In 2011, the State Council, China’s cabinet, set up an Inter-ministerial Joint Conference on Clearing Up and Rectifying Exchange Markets to prevent financial risks, chaired by the CSRC which instigated a crackdown of illegal securities activity and trading venues. However, the responsibility for regulating companies conducting business without licenses lies with the local governments where they are based. All the CSRC and other watchdogs can do is to inform local governments, local market regulation administrations and police departments of any illegal activities.

Margin trading only began in China in 2010 when the government started a pilot program involving some securities firms. Regulators loosened up restrictions in 2012 but instigated a severe crackdown in January 2015 to rein in a leverage-fueled stock market boom which collapsed spectacularly over the following months.

Under Chinese regulations, margin lending can only be conducted by licensed brokerages and no other institutions or individuals are allowed to lend money to investors to bet on the stock market. Anyone wanting to engage in margin trading needs to meet a range of requirements in an effort to contain the potential risks of small, unsophisticated investors losing their shirts. The conditions include opening a special margin trading account six months before they are allowed to start using it, and having securities assets worth 500,000 yuan in their account on average for the previous 20 trading days.

More than 90% of the 165 million registered A-share trading accounts have assets of 100,000 yuan or less, a person familiar with the matter told Caixin. As a result, the margin trading rules shut out most investors and many have turned to unlicensed margin trading platforms to leverage up.

Others have resorted to borrowing from the banks where interest rates on loans are lower than the 7% to 9% rates charged by brokerages on margin trading financing. One investor told Caixin he obtained a 200,000-yuan consumer loan at an interest rate of 4.36% from a commercial bank and had poured the entire amount into the stock market.

Although there’s no data to gauge the extent of the illegal margin trading activity, the amount of money being borrowed legally to bet on the stock market gives some idea of the surge in leverage that’s fueling the bull market: outstanding margin financing on the Shanghai and Shenzhen stock exchanges reached 1.28 trillion yuan on Thursday, a 41.6% jump from a year earlier.

With its hands partially tied behind its back by inadequate regulatory authority to crack down on illegal margin-trading platforms, the CSRC decided to “attack fire with fire” by naming and shaming them, a source close to the regulators told Caixin. The watchdog sees exposure as an effective way of curbing their activities, he said.

China’s stock market entered a technical bull market on Monday as the benchmark Shanghai Composite Index (SCI) had risen over 20% since March 23, when it stood at a one-year low of 2,660.17. The index closed higher for the eighth trading day in a row on Thursday, hitting 3,450.59, the highest since February 2018. But the rally faltered on Friday as investors took profits, and the index closed down 1.95%.

Analysts have attributed the equities rally to the loose monetary conditions at home and abroad and confidence about the recovery of the Chinese economy from the Covid-19 pandemic. But views are mixed on whether the bull market will keep charging ahead given the uncertain outlook for the global economy and growing tensions with the U.S.