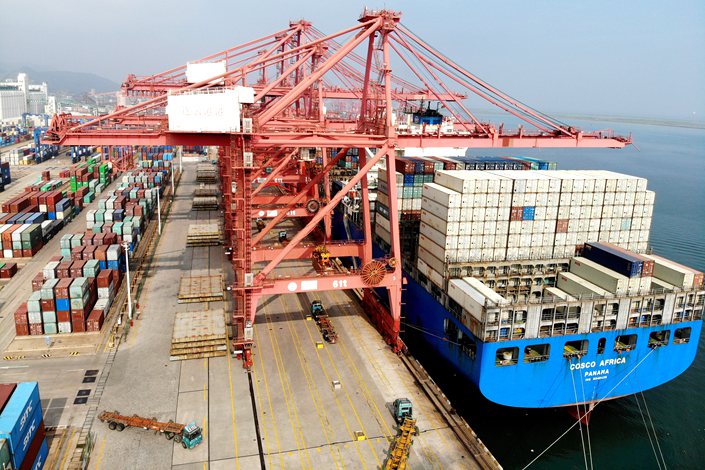 Imported goods get unloaded from a freighter Tuesday at Lianyungang Port in East China's Jiangsu province.

Exports grew 0.5% (link in Chinese) year-on-year in dollar terms last month, reversing a 3.3% drop in May, according to data from the General Administration of Customs. The reading beat the median forecast for a 3% decline in a Caixin survey (link in Chinese) of economists.

Imports rose 2.7% year-on-year in June, up from a 16.7% slump (link in Chinese) the previous month and marking the first increase this year. The reading outpaced the median forecast for a 10% drop in the Caixin survey.

In June, China’s trade surplus shrank to $46.4 billion from $62.9 billion the previous month.

Overseas demand for epidemic prevention supplies has risen fast recently, according to the customs administration. In the first half-year, exports of textiles, including face masks, rose 32.4% year-on-year. In the same period, exports of medical equipment, as well as medical materials and medicine grew 46.4% and 23.6%, respectively.

“When China resumed most of its production in late March, other major economies were deeply mired (in) the pandemic with broad-based restrictive lockdowns, providing it with substantial space to ramp up exports of medical products, such as masks and ventilators,” economists at Nomura International (Hong Kong) Ltd. said in a note. They added that as production in other major economies was hit hard by the pandemic, massive government stimulus created a large gap between demand and supply which was filled by Chinese exports.

China’s trade with the U.S. shrank in the first half of 2020, though imports of American goods dropped at a slower pace in June as China worked towards meeting its phase-one trade deal commitments. Imports from the U.S. dropped 4.8% year-on-year (link in Chinese) in the first six months, a milder decline than a 7.6% fall (link in Chinese) in the January-to-May period. That compares to a 7.1% decline for China’s total imports in the same period.

“Facing the difficulties of a sudden epidemic, we are still keeping our promises and implementing the (Sino-U.S. trade) agreement,” Li Kuiwen, a spokesperson for China’s customs administration, said at a briefing Tuesday (link in Chinese). Signed in January, the agreement includes a pledge from China that it will increase its purchases of U.S. goods and services by no less than $200 billion over the following two years from a 2017 baseline.

In the second half of the year, China’s foreign trade sector still faces a difficult situation amid increasing uncertainties due to the pandemic and economic and trade frictions with the U.S., Li said.

Economists hold mixed views on the trade outlook in the second half-year. “There are signs that overall global trade is stabilizing and we expect exports to recover more decisively later in (the second half) alongside the global economy,” Louis Kuijs, head of Asia economics at research firm Oxford Economics Ltd., wrote in a note.

But the Nomura economists said that much depends on the progress of the pandemic. “If the Covid-19 pandemic extends to end-2020 or even into 2021, China’s export growth would eventually be hit by the weakness in global demand,” they said.