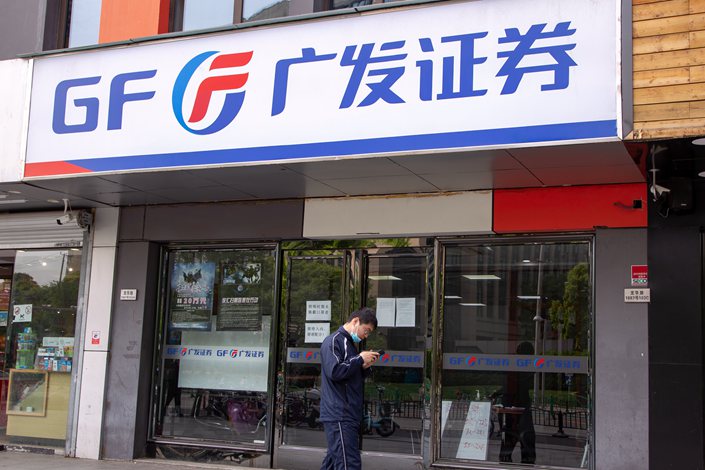 GF Securities has been dropped as joint lead underwriter for a lucretive private placement after it was suspended last week from sponsoring equity-related issuances. Photo: IC Photo

GF Securities Co. Ltd. is already feeling the heat from the punishment handed down by the securities regulator last week for its role in the 88.7 billion yuan ($12.7 billion) fraud at drugmaker Kangmei Pharmaceutical Co. Ltd.

The firm has been dropped as joint lead underwriter for a private placement of A-shares planned by state-owned Guosen Securities Co. Ltd, a financial services group with long-standing ties to the Hong Kong- and Shenzhen-listed brokerage. Guosen Securities, which is also listed in Shenzhen, made the announcement (link in Chinese) on Monday, three days after GF Securities revealed that it has been suspended from sponsoring any equity-related issuance for six months and banned from bond underwriting for one year. The punishment was handed down by the Guangdong branch of the China Securities Regulatory Commission (CSRC).

Kangmei, one of the country’s largest listed drugmakers, admitted in April 2019 that “accounting errors” had caused a 29.9 billion yuan overstatement in its cash holdings. An investigation by regulators subsequently found that the company had engaged in a series of illegal activities including forging documents for nonexistent business activities leading to an overstatement of cash holdings amounting to 88.7 billion yuan from 2016 to 2018.

The company was fined 600,000 yuan in May by the CSRC for inflating revenues and fabricating bank deposits. Kangmei’s former chairman was taken into police custody earlier this month over allegations that he had directed the drugmaker’s financial fraud.

GF Securities’ relationship with Kangmei stretches back almost 20 years. It was an underwriter for the company’s IPO in Shanghai in 2001, and over the years underwrote a string of bond and equity issuances for the drugs producer. It also made loans to Kangmei shareholders.

The brokerage also has long-standing links with Guosen Securities, and underwriting the 15 billion yuan private placement would have been a lucrative income generator. Guosen had been planning the share sale since November 2018 and finally got approval in April, but it had to execute the issuance within 12 months.

A source close to the CSRC told Caixin that if Guosen hadn’t dropped the firm as joint underwriter it would have had to wait until at least January to proceed. “With regulatory approval for the placement in the bag, Guosen couldn’t possibly wait another six months,” the source said.

In response to Caixin’s request for comment, a GF Securities spokesperson said the company would endeavor to ensure its existing projects were carried out in compliance with regulations and would continue to supervise its listed clients.