By Qian Tong and Flynn Murphy 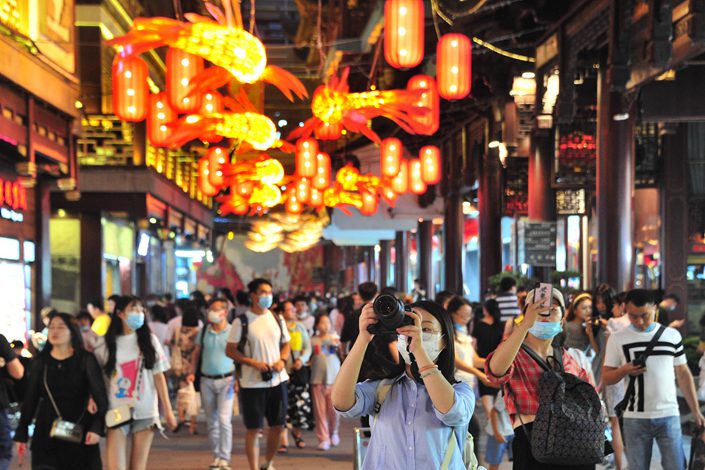 China’s tourism industry is back in business — at least according to the ministry that oversees it.

After a nearly six-month shutdown, the Ministry of Culture and Tourism (MCT) issued a directive Tuesday calling for the resumption of domestic tourism trade in all regions with a low coronavirus risk.

The order means travel agencies and online tour companies, which have been dormant since January, will once again be able to sell interprovincial group package tours — a big part of their core business.

It follows growing calls for authorities to lift domestic tourism bans to help lead a broad economic recovery effort since the epidemic was brought broadly under control in China. The tourism sector contributed more than a tenth of the country’s GDP last year, according to the ministry.

Tourist numbers have also been closely watched for signs of confidence from consumers that the worst of the virus outbreak is behind them.

Regions with a medium or high risk of Covid-19 resurgence as decided by China’s health authorities are excluded from the new measures.

And international packages — a significant money-maker for the industry — remain banned.

The new directive includes a litany of disease control measures, including cleaning and disinfection guidelines, and limiting tourist site visitor numbers to no more than half of capacity.

The MCT suspended group tours and air ticket-hotel package deals on Jan. 23, the day the Covid-19 epicenter of Wuhan was placed in lockdown in an effort to slow the spread of the virus. Outbound tourism was banned four days later.

While there were modest spikes in local tourism on recent national holidays such as May Day and last month’s Dragon Boat Festival, interprovincial and international travel is the real core business of China’s travel agencies.

One tour operator in Chongqing told Caixin that travelers from other provinces accounted for more than 95% of their business last year.

A group tour wholesaler in Southwest China’s Yunnan province responded to the announcement with a mix of excitement and apprehension. “The tourism industry is greatly affected by economic conditions,” said the woman, who Caixin granted anonymity so she could speak freely. “People are very careful about spending money right now,” she said, adding that whether her business would recover remains to be seen. “Everyone understands that the reality is still grim.”

The pandemic that has taken nearly 580,000 lives and spread to every continent except Antarctica has also gutted global tourism, along with related sectors including restaurants, shopping and outdoor entertainment, as people stay home to avoid catching the virus.

The China Tourism Research Institute estimates a decline in domestic tourist trips of 56% for the first quarter and 15.5% for the whole year, a year-on-year decrease of 932 million trips. Domestic tourism revenue is expected to decline by 1.2 trillion yuan ($171.4 billion) for the year.

Airlines, railways and online travel platforms have launched promotions and even given out free tickets to promote a recovery.

In a statement Monday, Chinese travel giant Ctrip welcomed the news and said the search volumes for holidays, hotels and flights had all shot up, with domestic travel searches spiking by 500%.

Tourism contributed 10.94 trillion yuan to China’s GDP last year, accounting for more than 11% of the total, according to the MCT.

This story has been updated to correct the day when the Ministry of Culture and Tourism issued the directive for the resumption of the domestic tourism trade. It was Tuesday, July 14.