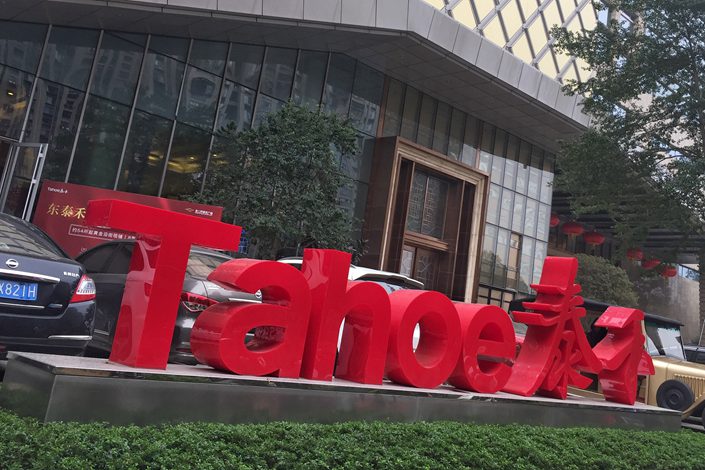 Debt-laden luxury villa developer Tahoe Group Co. Ltd. recently estimated that it had booked a loss in the first half of the year, and warned creditors it expects to default on more debts.

The Fujian province-based developer said that it expects a net loss of 1.46 billion yuan ($209 million) to 1.86 billion yuan for the first half of this year, down from a net profit of 1.56 billion yuan over the same period last year, according to a Wednesday statement (link in Chinese).

The company is facing mounting losses amid declining sales and rising interest payments. Its 2019 annual report (link in Chinese) showed the company was struggling even before the coronavirus outbreak, losing some 1.9 billion yuan — excluding extraordinary profit and loss — in the fourth quarter of last year, down significantly from a net profit of 627 million yuan over the same period in 2018 (link in Chinese).

The property developer said that whether it can meet upcoming payments on its existing debt obligations will be based on an assessment of its overall financial condition, and that “lenders and noteholders should not expect payments of principal and interest according to existing terms” in a statement published Tuesday on the Singapore Stock Exchange’s website.

Just last week, the company failed to repay a 1.5 billion yuan bond, taking its total overdue borrowings to 27.1 billion yuan. The default underscores the growing financial stress on cash-strapped home-builders hit by the double whammy of a slowing economy and the fallout from the coronavirus pandemic.

The company also disclosed in a filing (link in Chinese) to the Shenzhen Stock Exchange last week that it has a total of 55.5 billion yuan of debt maturing this year, but had only repaid 4.8 billion yuan by July 7 and managed to extend the repayment period for another 6.2 billion yuan of debt which was originally due in the first half of the year.

The growing risks attached to Tahoe’s bonds and its limited ability to refinance its debts prompted Fitch Ratings Inc. to cut the company’s long-term foreign currency issuer rating last week to RD (restricted default) from CC, dropping further into junk bond territory, “as the company has experienced an uncured payment default on a material financial obligation but has not yet entered into bankruptcy filings, administration, receivership, liquidation, or other formal winding-up procedures, and has not otherwise ceased operating.” Fitch Ratings previously cut the firm’s rating twice in four days in May, first from B- to CCC+ on May 11 and then to CC on May 14.

In order to stabilize itself, Tahoe has sought financial advisors to provide strategic advice with respect to its capital structure, it said in the Singapore bourse statement. “Such financial advisors will assist the company in reviewing and assessing various options and in formulating a plan to implement an appropriate restructuring of the group’s onshore and offshore debt obligations,” Tahoe said.