After Six-Month Intermission, the Show Will Go On at China’s Cinemas 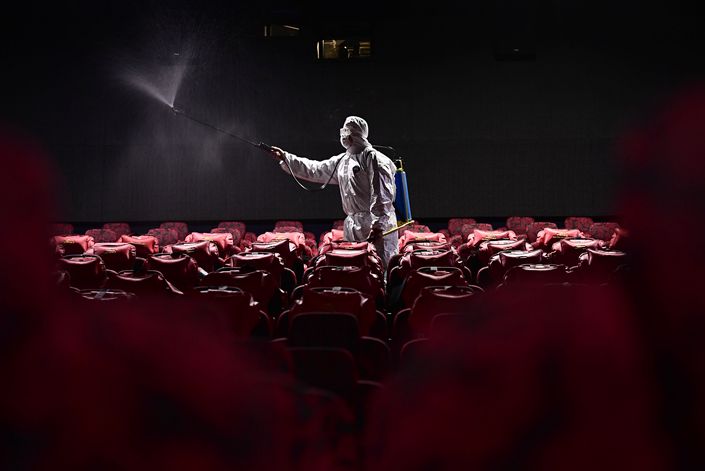 China’s movie theaters could start to reopen as soon as next week under strict new guidelines from the film regulator, becoming one of the last major sectors to resume business following massive closures to contain the country’s Covid-19 pandemic.

A new document (link in Chinese) issued Thursday on the China Film Administration’s website said many of the nation’s movie theaters that have been shuttered for the last six months can start to reopen on July 20. At the same time, it also spelled out a long list of requirements and precautions operators must take before and after reopening, highlighting concerns about potential for disease-spreading in a sector where groups of strangers sit in small confined spaces together for hours at a time.

The new guidelines only allow theaters to reopen in low-risk areas, which currently comprise most of China as the domestic outbreak is largely under control. The country currently has no high-risk areas, though the remaining few medium-risk areas will need to keep theaters closed for now.

Before they can reopen all theaters must first report to their relevant local government and Communist Party organizations and then discuss with local disease control and prevention authorities on how to reopen in an orderly manner. Finalized plans should be reported to the China Film Administration, the latest notice said.

Once reopened, all theaters should do only online ticketing to avoid human-to-human contact, sell tickets for only every-other seat in theaters, and maintain a seating distance of 1 meter or more between strangers. For any given screening, the theater should be filled to a maximum of 30% capacity.

Most of China’s movie theaters were ordered to close in late January when the domestic Covid-19 outbreak began to peak, and have now been closed for 176 days. The closure order came just as China was preparing to celebrate the busy Lunar New Year period, forcing cancelation of theatrical releases for many would-be blockbusters. Some movies were made available over the internet, bringing in some money but most likely far less than they would have earned otherwise.

The reopening of theaters was signaled as early as April 8, when a central government group overseeing disease control and prevention measures put out a notice saying that entertainment venues in low-risk areas could “prudently open.” It sent a similar signal on May 8, in the form of a notice on the reopening of such entertainment venues, as provincial and city governments issued their own reopening guidelines.

Many industry participants told Caixin that they began making necessary preparations to reopen in May, but have been unable to resume business because they haven’t received any movies to show.

China’s box office brought in just 2.25 billion yuan ($322 million) in the first quarter, down 88% from a year ago, including one day when entire industry brought in just 40,000 yuan nationwide. With the loss of the important Lunar New Year period, many operators have seen their income for the first half of the year nearly wiped out entirely.

The industry winter has hit smaller operators especially hard, since most don’t have the resources to survive such a long downturn. Through May 7 this year, 6,817 theater companies had shut down, while another 4,189 related companies had also closed, according to Caixin statistics.