By Qu Hui and Ye Zhanqi and Mo Yelin 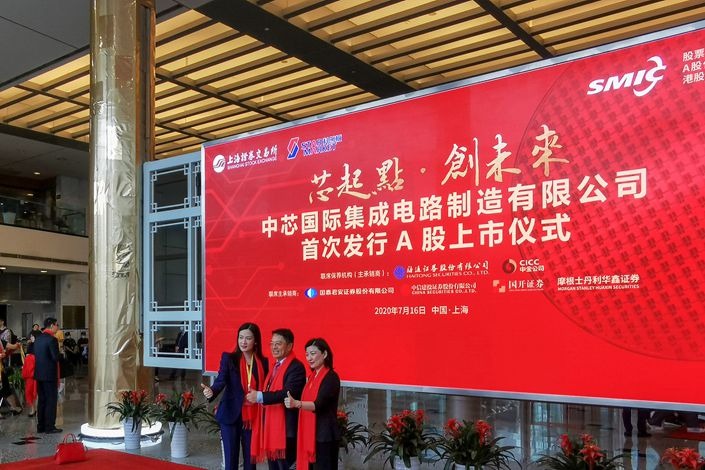 By allowing international investors to buy its shares, SMIC hopes to maintain the company’s international profile, said an investor.

Two international funds, including one from Singapore, were among 29 institutional investors that participated in the latest share offering by Semiconductor Manufacturing International Corp. (SMIC), China’s top semiconductor manufacturer, which debuted in Shanghai on Thursday.

Singapore’s sovereign fund GIC Pte. and the Abu Dhabi Investment Authority (ADIA) were among the institutions selected by SMIC as cornerstone investors for its share offering in the run-up to a Shanghai IPO.

Altogether, SMIC sold shares worth 23.1 billion yuan ($3.3 billion), or 43.48% of its planned fundraising target of up to 53.2 billion yuan, to these strategic investors.

GIC subscribed for shares worth 3 billion yuan, while ADIA signed on for an investment valued at 400 million yuan.

By allowing international investors to buy its shares, SMIC hopes to maintain the company’s international profile, said an investor familiar with the thinking of the company’s management board. SMIC executives realized that “chip manufacturing is an international business highly reliant on global supply chains,” the source said.

Previous experience also told the board that there are no highly successful firms in the sector that are entirely backed by Chinese state-owned capital, the source added.

Shanghai-based SMIC was founded two decades ago by Richard Chang, an engineer from Taiwan who previously worked 20 years for U.S. semiconductor giant Texas Instruments. At the time of its founding, SMIC had a very diversified ownership structure, with investors from regions including the Chinese mainland, Taiwan, the U.S., and Singapore. However, SMIC has since attracted more capital injections from state-backed companies.

China Information and Communication Technologies Group Corp, which subscribed for 2 billion yuan worth of shares in SMIC’s latest share offering, has been its largest shareholder since 2008. After the latest capital injection, however, the company’s stake in SMIC would be reduced to 12.61% from the previous 15.77%. The state-owned telecom group previously held SMIC’s shares under the name of Datang Telecom Group.

After subscribing for 3 billion yuan worth of shares, CICIIF’s stake holding in SMIC will fall to 12.51% from 14.62% but it will remain as SMIC’s second largest shareholder. CICIIF, which was created in 2014 to boost China’s chip sector, has been SMIC’s second largest shareholder since 2015. Its capital injection into SMIC at the time was a major boost for the company’s development.

Notably, participants in SMIC’s share sale also include a total of 15 enterprises which are buying in under a newly incorporated investment company, the Qingdao Juyuan Xinxing Equity Investment Partnership. The companies are involved in various businesses activities across the semiconductor supply chain. They include Shanghai-listed Advanced Micro-Fabrication Equipment Inc., which makes equipment used to manufacture chips. The block of companies subscribed to SMIC shares worth 2.2 billion yuan.