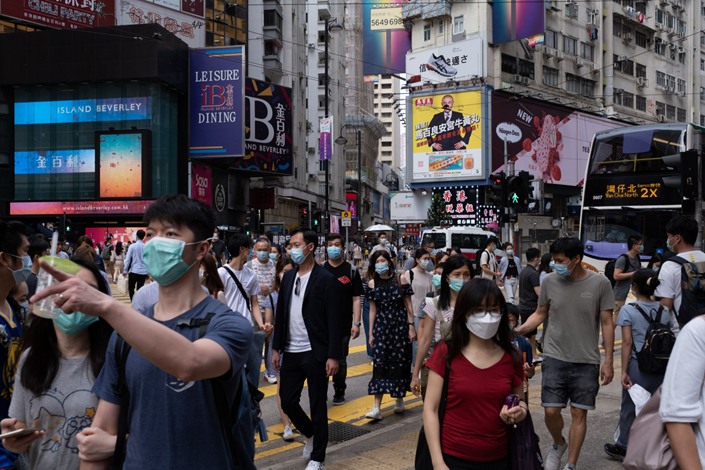 (Bloomberg) — Hong Kong is emerging as a case study of how the coronavirus pandemic is affecting vulnerable members of society, as tens of thousands have been thrown out of work with little social safety net to support them in one of the world’s most unequal and expensive cities.

The economy is mired in its deepest recession on record after a disastrous year of social unrest and then the virus outbreak, with a net 250,000 people losing work in the city since last May, according to data compiled by Bloomberg from the Census and Statistics Department Hong Kong. The lower-paid services and hospitality sectors have been hit the hardest, as protests and virus-control measures shuttered retailers and left hotels and restaurants empty.

As Hong Kong has no general unemployment benefit provision, that leaves most low-income job seekers reliant on savings, family assistance and charities at a time of stretched budgets and renewed concerns over a “third wave” of the virus outbreak. Hong Kong’s income inequality has long been higher than any Group of 7 economy, and the 19 wealthiest billionaires in the city control assets of about $230 billion, according to the Bloomberg Billionaires’ Index.

“The wealth gap has obviously widened because of Covid,” said Iris Pang, greater China chief economist at ING Bank NV. “Hong Kong could become increasingly more unequal in terms of income. Poverty is becoming an imminent issue of Hong Kong. In short, the poor are getting poorer.”

Job vacancies in the retail as well as the accommodation and food services sectors, among the most important sources of employment for the working class, have been particularly hard hit by the virus. They plummeted 64% and 80%, respectively, from a year ago as of March.

The total number of employed people has dropped by almost 250,000 for a record 6.5% decline from a year ago as of May. The number employed in the city now stands at just more than 3.6 million, less than half of Hong Kong’s 7.5 million population, as the number of unemployed has almost doubled since the end of 2019 to more than 230,000.

As of 2018 about 1 million people in Hong Kong were considered poor by the government’s definition, for a poverty rate of almost 15% after adding recurring benefits such as the Higher Old Age Living Allowance in June 2018, according to a December government report. It’s likely that a year of political unrest and recession as well as the virus has seen those numbers worsen.

One of the most vulnerable groups is the city’s growing population of people 65 and older, who are often unprepared for retirement and at a disadvantage when competing for jobs, while now also facing greater health risks from the virus. Hong Kong has a weak social safety net for its older population.

“When I was 50 years old, people would still want me to work for them, but at the Chinese restaurant that I worked for, even though I could handle the job, the boss still looked down on me,” said Y.T. Chan, a 65-year-old woman who lost her full-time job as a dishwasher last November following an illness.

After struggling to find work for months, she now earns about HK$2,000 ($258) a month from fill-in work as a cleaner and dishwasher. Her income can barely cover her expenses, which includes HK$4,200 in rent a month, so she relies on loans from friends or occasional money sent from her sons in mainland China.

Chan says she has bread for lunch and dinner is soup made from the same pork bone for almost a week. She also eats leftovers at the restaurants where she sometimes works.

“The co-workers find it disgusting, but I don’t mind,” she said.

Older people are often perceived by employers as having less physical strength and that they’ll burden companies with more costly medical fees, said Jason Lam, a community organizer with Concerning CSSA and Low Income Alliance, a charity working with the underprivileged in Hong Kong.

“When they become unemployed and try to find a job in another field, it is very difficult with an age over 60. Employers will simply throw away their CVs,” he said.

For many in Hong Kong, though, the prospect of comfortable retirement at 65 is a dream.

A Fidelity global retirement survey found that workers 55 and older in the lowest wage category of HK$15,000 to HK$30,000 a month scored the worst among all demographic groups in Hong Kong with a retirement readiness score of 53 out of 150, meaning they are only able to meet 53% of their estimated retirement expenses. This compares with an overall score of 75 for Hong Kong.

It’s not just the city’s older population that is suffering, however. Losing a job can be more daunting in Hong Kong than in almost any other place in the world as it is the most expensive city globally for renters, according to a 2019 report from Deutsche Bank. For the have-nots, living in tiny subdivided apartments, containers and industrial buildings illegally for cheaper rents are the only option.

Ng Fung-kiu, a 39-year-old single mother of two teenagers, said she has suffered from insomnia since being fired from a sales job in February.

Ng lives in a tiny apartment she rents for HK$5,800 a month that’s so small she has to cook next to her toilet. But without a job and little savings, she isn’t sure if she can make the rent from one month to the next. She now works as a cleaner in a residential building for HK$5,000 a month along with other occasional cleaning jobs. Ng relies on charity food packages while she hunts for work.

“I spend all my time thinking about getting a stable job so that I don’t have to worry anymore,” she said. “I’m at the point where I have no idea how I can get by.”

In the meantime, the city’s poor are left largely to fend for themselves.

“I met a recently unemployed man in his early 60s with just a combined HK$48 savings in two of his bank accounts,” said Lam, the community organizer. “He was so overwhelmed when we simply offered him some food packages — you could tell how hard his life was.”