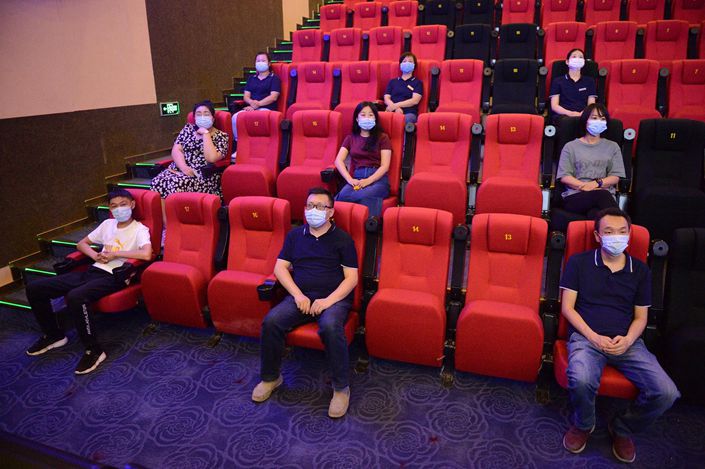 Workers prepare Saturday for movie theaters to reopen in Hohhot in the Inner Mongolia autonomous region.

The curtain is up once more at Chinese cinemas, though fans of big screen features shouldn’t expect too much when they return to their favorite theaters.

Monday marked the first day that Chinese theaters were officially allowed to resume operation under a directive issued last week by the China Film Administration, the nation’s film regulator, ending a half-year closure during the global pandemic. Despite that, however, considerable effort needed to restart the sector means offerings will be highly limited at first, as many individual theaters also wait for local clearance to reopen.

Diehards who insist on returning to theaters on the first official day of reopening should be able to find at least three films showing, two of them new and one a repeat from late last year. The two new films include the cultural documentary “Bright Torch 3D”; and the drama “A First Farewell” set in West China’s arid Xinjiang autonomous region. Additionally, last year’s thriller “Sheep Without a Shepard” will also open for screenings.

Most of China’s movie theaters were ordered to close in late January when the domestic Covid-19 outbreak began to peak. The closure order came just as China was preparing to celebrate the busy Lunar New Year period, forcing cancelation of theatrical releases for many would-be blockbusters. Some were made available over the internet, bringing in some money, but likely far less than they would have earned otherwise. Many others are hoping to make their theatrical debuts late this year or next.

The China Film Administration’s reopening order came with a host of strings attached, most aimed at preventing the spread of the disease in theaters that could become breeding grounds due to their high density of strangers sitting close together for hours at a time.

All theaters have been instructed to do only online ticketing to avoid human-to-human contact, sell tickets for only every-other seat in theaters, and maintain a seating distance of 1 meter or more between strangers. For any given screening, the theater should be filled to a maximum of 30% capacity.

Only theaters in areas deemed “low risk” will be allowed to open for now, though that includes much of China as the domestic Covid-19 outbreak is largely under control. In the Chinese capital of Beijing, which had a brief resurgence just a month ago, a regulator that oversees local cinemas told Caixin the approval process for reopening theaters was underway, but could not provide additional details.

While only a handful of movies may be playing at the launch, many are quickly lining up for theater runs. At least two imported movies will be available from Friday, the action-drama “Bloodshot,” starring Vin Diesel, and the children’s classic “Dolittle” starring Robert Downey Jr. A pair of animated films that are popular with children during the summer holidays have been quick to follow, with “Mr. Miao” and “Pat & Mat” announcing July 31 release dates.

Many industry participants previously told Caixin that they began making necessary preparations to reopen in May, but have been unable to resume business because they haven’t received any movies to show.

China’s box office brought in just 2.25 billion yuan ($322 million) in the first quarter, down 88% from a year ago, including one day when the entire industry brought in just 40,000 yuan nationwide. With the loss of the important Lunar New Year period, many operators have seen their income for the first half of the year nearly wiped out.