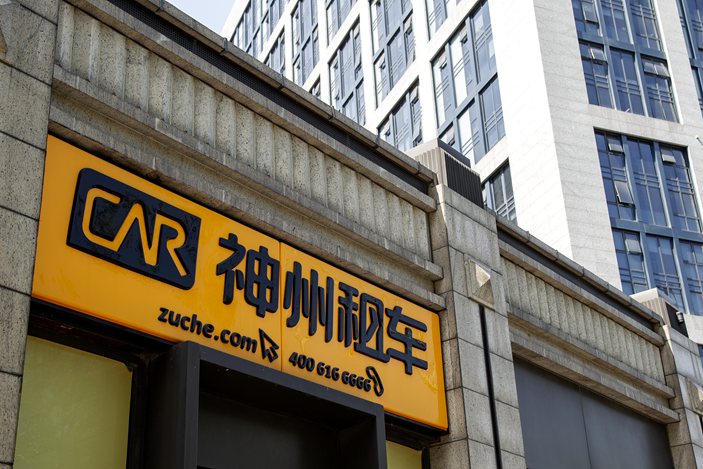 A company controlled by the founder of scandal-plagued Luckin Coffee Inc. agreed to sell its stake in Car Inc. to a unit of Beijing Automotive Group Co. Ltd. (BAIC Group), ending a month-long fight for ownership of China’s biggest car rental provider.

Ucar Inc., a limousine services company controlled by Lu Zhenyao, will sell its 20.9% stake, or about 443 million shares, in Car Inc. to Jiangxi Jinggangshan BAIC Investment Management for as much as HK$1.4 billion ($180.6 million), Car Inc. said Monday in a statement. Jinggangshan BAIC will acquire an additional 171 million Car Inc. shares, or 8%, from U.S. private equity firm Warburg Pincus.

The deal settled a month-long battle between China’s two leading automakers for the Car Inc. stake. Earlier Monday, SAIC Motor Corp. Ltd., China’s largest automaker, said it decided to drop its offer to buy 28.91% of Car Inc. due to disagreement over terms of the acquisition.

Car Inc. first revealed a planned ownership change June 1 by signing a strategic partnership with BAIC. Under the agreement, the automaker could acquire as much as a 21.26% stake in Car Inc., including the entire holding of Ucar, to become the company’s second-largest shareholder. No financial detail was released at that time.

In early July, however, SAIC Motor stepped in. Car Inc. said July 2 that the Shanghai-based carmaker agreed to pay as much as HK$1.9 billion to acquire a 28.92% stake from Ucar and Warburg Pincus and become the largest shareholder. SAIC offered HK$3.1 for each Car Inc. share, the same as BAIC’s final offer announced Monday. The price represents a 33% premium over Car Inc.’s trading price July 2 but an 86% drop from its peak of HK$22 recorded in May 2015. The stock closed at HK$2.93 Monday.

Jinggangshan BAIC’s final purchase plan was largely the same as the one proposed by SAIC Motor in early July. People close to the deal said authorities in Beijing and Shanghai stepped in and coordinated the deal.

The stake sale would end the financial relationship between Car Inc. and Lu, who also goes by Charles Lu. Lu has been mired in the financial reporting fraud scandal of Luckin Coffee, which faces delisting from the Nasdaq stock exchange after it was exposed for fabricating transactions that inflated net sales by about 2.12 billion yuan last year.

Car Inc. was one of the companies at the center of Lu’s business empire, which backed the rapid rise of Luckin. The company has been rattled by debt woes and fallout from the Luckin scandal. A high-level executive at Luckin previously told Caixin that Lu and other top executives at Car Inc. were considering leaving their management positions. Lu resigned as Car Inc.’s chairman in June.

Car Inc.’s revenue and profit have slumped amid the coronavirus outbreak. In the first quarter, it recorded a net loss of 187.7 million yuan, compared with net profit of 390 million yuan in the same period in 2019. Revenue slumped by 28% to 1.3 billion yuan.

Ucar, previously Car Inc.’s largest shareholder, announced late in April it would sell down its stake in the company in two tranches to Warburg Pincus as part of efforts to ease its financial strain. In the first tranche sale, completed in April, Ucar sold 4.65% of Car Inc. shares for HK$2.3 each, raising HK$227 million. But the second tranche of the deal, in which Ucar would have sold 12.46% of Car Inc. shares to Warburg, was later terminated.

Ucar already has a relationship with BAIC through a previous deal under which Ucar bought 67% of the nearly defunct German car brand Borgward from BAIC’s Beiqi Foton unit last year for nearly 4 billion yuan ($560 million). But now Ucar may be having difficulty paying both the purchase price and the large debt that Borgward owes Beiqi, based on an April stock exchange filing by Beiqi Foton.

Meanwhile, Lu is still struggling with Luckin’s restructuring as the company is moving toward the Nasdaq delisting. Lu was removed as Luckin’s chairman earlier this month in a major revamp of management but remains the controlling shareholder of the company.