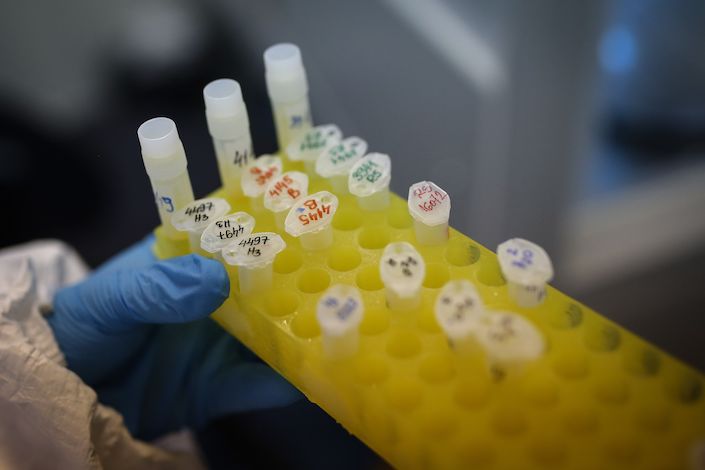 (Bloomberg) — CanSino Biologics Inc.’s experimental coronavirus vaccine showed promising results in a mid-stage clinical study, paving the way for the next phase of tests as the Chinese company jostles with Western pharma giants to deliver one of the first Covid-19 pandemic vaccines.

The shot was shown to be safe and induced an immune response, according to a study published in The Lancet medical journal, reinforcing the company’s status as a front-runner in the vaccine race. CanSino shares fluctuated in Hong Kong Tuesday, rising about 1% by noon after erasing an earlier gain of 7.9%.

It’s too early to determine whether the vaccine candidate effectively protects against infection. The study found that people with a high level of preexisting immunity to an adenovirus used in the delivery method were less able to generate antibodies against the coronavirus. Adenoviruses are common viruses that cause a variety of illnesses, some with cold-like symptoms.

The authors also stressed that no participants were exposed after vaccination to the SARS-CoV-2 virus, which causes the Covid-19 illness.

Tianjin-based CanSino emerged as one of the fastest movers on a vaccine in May when it became the first to publish a full scientific study on its early human trials — a crucial step because it allows researchers to assess a pharmaceutical product’s potential.

Among other vaccine candidates, a shot from AstraZeneca Plc and Oxford University showed promise Monday in the first phase of tests, and a partnership of Pfizer Inc. and BioNTech SE delivered positive trial updates. The results boosted optimism about ways to counter a pandemic that’s killed more than 600,000 people and triggered economic turmoil worldwide.

The coronavirus pandemic, which first emerged in Wuhan late last year, provoked a powerful research push in China amid exacerbated political tensions with the U.S. Beijing mobilized health authorities, drug regulators and research institutes to work around the clock with local companies.

CanSino’s experimental vaccine completed the second of three stages of human testing required before a pharmaceutical product can be sold. Its ability to generate a response against Covid-19 is challenged by the level of immunity participants have against the adenovirus the shot employs to deliver genetic material of the novel coronavirus.

The study in The Lancet found that people with a high level of preexisting immunity to the adenovirus tended to report fewer adverse effects but also demonstrated less ability to generate antibodies. No difference, though, was observed in participants’ ability to stimulate T-cell response.

Antibodies could latch onto the spike proteins on the surface of the coronavirus, preventing it from entering cells. T-cells can eliminate cells that are already infected by the virus. Both kinds of immunity are believed to be important in producing a successful shot against the virus.

“I thought the data was unimpressive,” said Brad Loncar, chief executive officer of Loncar Investments in the U.S. and a CanSino investor. “The antibody and T-cell responses were both very low.”

Such preexisting immunity, the study says, “is considered to be the biggest obstacle for the candidate Ad5-vectored COVID-19 vaccine to overcome.” The potential solution to diminished immunity response, it says, would be a booster shot three to six months after the first inoculation. CanSino’s planned trial in Canada would include groups of participants who will receive a second shot.

“The possible paths to victory for CanSino ahead are either that the levels of immunity it offers turn out to be enough, especially for a younger population, or that they get a booster shot strategy to work,” Loncar said.

The study also noted that immunity to this type of adenovirus varies from place to place. While at least half of adults in developing countries from India to Kenya have high neutralizing antibody concentrations, fewer than 30% of adults in the U.S. are immune.

The study said CanSino is planning multicenter studies for phase III trials to determine the shot’s effectiveness, indicating the company may look for other places with severe Covid-19 outbreaks to test their shots in addition to Canada.