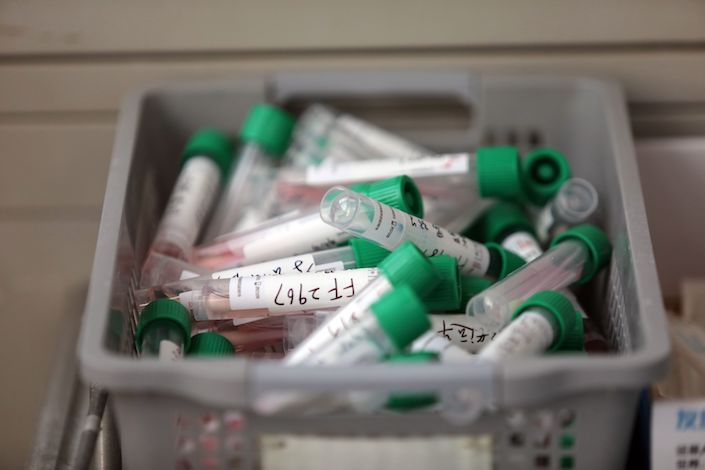 A view of the swab samples to be tested for SARS-COV-2 at a hospital in Wuhan. Photo: Bloomberg

Chinese scientists are ready to launch human trials of two additional potential vaccines for the novel coronavirus as global drugmakers race to find a way to stop the raging pandemic.

One of the candidates, co-developed by a Wuhan-based unit of China National Pharmaceutical Group Corp. (Sinopharm) and the Wuhan Institute of Virology, is set to commence clinic trials as it obtained regulatory approval Sunday, according to a government news release.

In the absence of effective treatment for a new disease that has claimed more than 118,000 lives worldwide, scientists around the globe are working at unprecedented speed to develop vaccines that could be the last resort for stopping the deadly virus. Drugmakers are pressing to roll out the vaccines as soon as next year, dramatically reducing the development time for vaccines, which often takes more than 10 years.

Around 70 potential vaccines for the coronavirus are under development globally, according to the World Health Organization (WHO). Three of them moved into human trials earlier.

The Sinopharm project will recruit 1,396 volunteers who have never contracted the virus in Henan province for the first two phases of human trials, which will be conducted until Nov. 10, 2021, according to the release. It usually takes three phases of human tests to prove a vaccine’s safety and effectiveness.

The vaccine was developed at the high-grade lab of the Wuhan Institute of Virology and backed by special funding from the Ministry of Science and Technology. Administered by the Chinese Academy of Sciences, the Wuhan Institute of Virology is located in the earliest epicenter of the outbreak and was among a handful of institutions that first worked out the genome sequence of SARS-CoV-2, the virus that causes the Covid-19 disease.

Sinovac R&D and its partners started vaccine development Jan. 28 and initiated animal tests March 3. They applied for human trials April 12 and won approval the next day, the company said.

Of the vaccines under development, the one moving fastest is jointly developed by Hong Kong-listed CanSino Biologics Inc. and the Beijing Institute of Biotechnology. The vaccine started phase two human trials last week.

The two others being tested in humans were developed separately by U.S. drugmakers Moderna Inc. and Inovio Pharmaceuticals Inc., according to the WHO.

The latest two candidates in China are both inactivated vaccines, meaning they are made from microorganisms that have been killed through physical or chemical processes. They are also the first inactivated vaccines to start human tests in the world.

The vaccine developed by CanSino is based on a different approach using adenovirus-based viral vector vaccine technology. Compared with adenovirus vector vaccines, inactivated vaccines involve a more-mature technology but with less efficacy.

With additional reporting by Bloomberg.