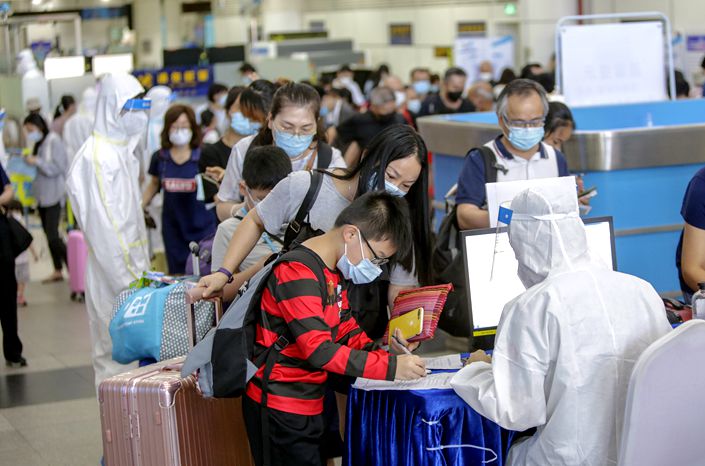 Chinese embassies will release details of their country-specific plans after reviewing local testing capacities, according to the announcement, though no timeframe was given for when the new requirement would take effect.

China will require all inbound air travelers to show a negative test result for Covid-19 dated within five days of embarking on their trip, as it seeks to prevent imported cases now that its own outbreak is largely under control.

The Tuesday announcement from China’s aviation regulator, customs administration and foreign ministry also comes as the nation starts to reopen many of its international air links that were canceled or sharply reduced during the outbreak. Those reductions have left many Chinese citizens, especially students, stranded abroad after the global pandemic began early this year.

The new rules apply to both Chinese citizens and foreign nationals entering China. They state that all passengers must provide negative results after taking nucleic acid tests at agencies designated or authorized by local Chinese embassies in the countries they depart from. Foreigners, most of whom are still banned from entering China, are required to apply for a personal health certificate at their Chinese embassy or consulate after taking a test. Chinese nationals can upload their test results into a “health token” app.

Chinese embassies will release details of their country-specific plans after reviewing local testing capacities, according to the announcement, though no timeframe was given for when the new requirement would take effect. A transport analyst at Tianfeng Securities Co. Ltd. told Caixin it appeared the new policy wouldn’t take effect immediately.

The testing requirement adds another layer to existing measures designed to prevent infected people from coming into China. Before that, people coming to China needed to make daily reports on their condition to authorities for 14 days before leaving, and have a temperature check during their flights. After arriving they needed to get tested and undergo quarantine. A returning student who took a flight to China in June confirmed to Caixin that the 14 days of reporting were required as well as inspection of a China-issued “health token” upon boarding the flight.

A representative from Shenzhen Airlines pointed out that many people are still trying to come to China, and the increased requirements are most likely aimed at containing the risk of imported cases. Such imports often make up the majority of new cases reported by China each day, though the numbers are still typically less than 10 daily.

A representative from Shanghai-based Juneyao Airlines told Caixin that Chinese carriers all strictly carry out China’s directives. But foreign airlines could have more difficulty complying, and thus the added new testing requirement could be designed to prevent them from accidentally letting infected passengers into the country, the representative said.

The move comes as China is gradually increasing its number of international flights that were sharply curtailed at the height of the pandemic, both by commercial forces as many people stopped flying, but also sometimes under government orders. As the situation has eased, many foreign carriers were prevented from resuming flights to China by strict Chinese rules, even as Chinese carriers continued to operate such overseas routes.

The U.S. pressured China into allowing American carriers back into the market last month, under the threat of cutting off flights operated by Chinese airlines. Since then China has allowed international carriers back in, including those from the U.S., France, Germany and Britain.

The aviation authority has also introduced incentives to encourage foreign airlines to effectively screen their passengers and prevent infected people from boarding flights. Under a plan announced in early June, it said airlines that went for three consecutive weeks without anyone testing positive for Covid-19 on a particular route would be allowed to add a new flight into China. It recently awarded five new flights to four domestic and international carriers under that scheme.