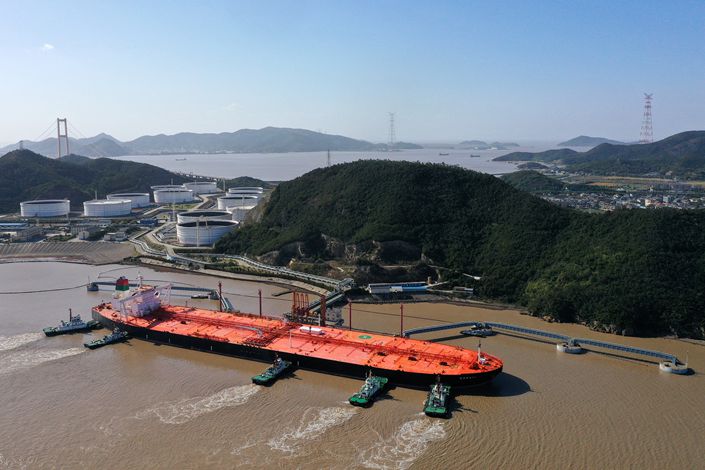 An oil tanker docks on May 12 at the Huangzeshan oil storage and transportation base in East China’s Zhejiang province.

China’s top four oil suppliers all posted double digit growth in June, as the country capitalized on a global price war among the world’s top producers by importing a record amount of crude.

Saudi Arabia remained China’s largest supplier, providing 8.88 million tons of oil last month, up 15.06% year-on-year and accounting for just over one-sixth of total imports, according to customs data released on Saturday. Imports from Russia, China’s No. 2 supplier, rose 11.55% over the same period in 2019 to 7.98 million tons.

The General Administration of Customs reported earlier this month that China’s overall oil imports grew 34.41% to 53.18 million tons in June, but did not provide a breakdown of supplier countries at the time.

June’s figure broke the previous record, set the month before, as domestic buyers flocked to take advantage of bargain prices between April and May when benchmark Brent Crude prices dived sharply to below $30 per barrel.

While the overall picture showed strong growth, June imports from China’s third largest supplier, Iraq, fell by almost 1 million tons from the previous month to hit 6.01 million tons. However that was still a 69.59% increase year-on-year.

Brazil was China’s No. 4 supplier, and its exports to China almost doubled from last year to 4.98 million tons, the data showed.

Meanwhile imports from the U.S. nearly halved to 1.14 million tons. There were no oil imports from Iran for the first time in at least eight years, the data show.

The new batches of oil will further worsen congestion in Chinese terminals, as the country’s storage capacity is approaching its limit. Earlier this month, an oil analyst told Caixin that oil tankers were waiting 15 to 20 days before they were able to offload their cargos in Shandong province, a refining hub.

Commodity market information provider JLC said in a note the June figures were within the expected range and that imports will fall in August as the shopping spree has front-loaded demand and many refineries have used up their import quotas.

China brought in a total of 11.03 million tons of crude oil in the first half of the year, down by 84. 59% compared with last year.