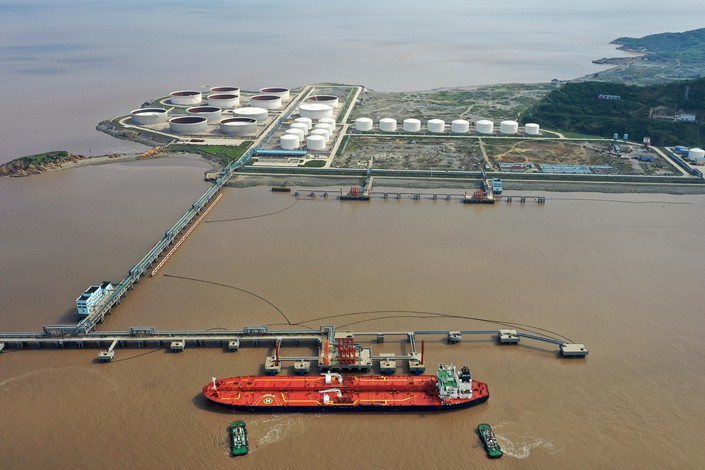 A ship carrying crude oil is moored at the Huangzeshan oil transfer terminal in Zhoushan, East China's Zhejiang Province, May 12.

China is almost out of space to hold the oil that domestic traders bought at bargain-basement prices earlier this year when the Covid-19 pandemic crushed global crude demand.

As of Wednesday, China had used up 69% of its crude oil storage capacity with the 33.4 million tons it had stockpiled, up by 24% from the previous year, according to data from energy information provider Oilchem China. That’s only 1 percentage point away from the 70% threshold that experts view as the country’s capacity limit.

The dwindling storage space is a result of the enormous amount of oil purchased by bargain-loving domestic buyers in March and April, said an oil analyst. The shipments, most of which arrived at Chinese ports over the past two months, has gradually topped up storage tanks.

The situation, which has also been exacerbated by low turnover, is most prominent in East China’s Shandong province, one of the country’s oil refining hubs. Oil tankers have to wait 15 to 20 days there before they are able to offload their cargos, the analyst added.

In May, China’s oil imports jumped 19.5% to 47.97 million tons, bringing the country’s cumulative imports for the year to 216 million tons, according to China’s customs agency.

Authorities have moved to deal with the issue by allowing some storage sites to expand their capacity and by granting some companies the rights to sell petroleum products abroad.

Industry analysts have forecast that China’s crude oil imports will continue to grow, perhaps even surpassing May’s levels. Given the gradual recovery of domestic demand for fuel and other petroleum products, the amount of oil held in storage may peak this month.