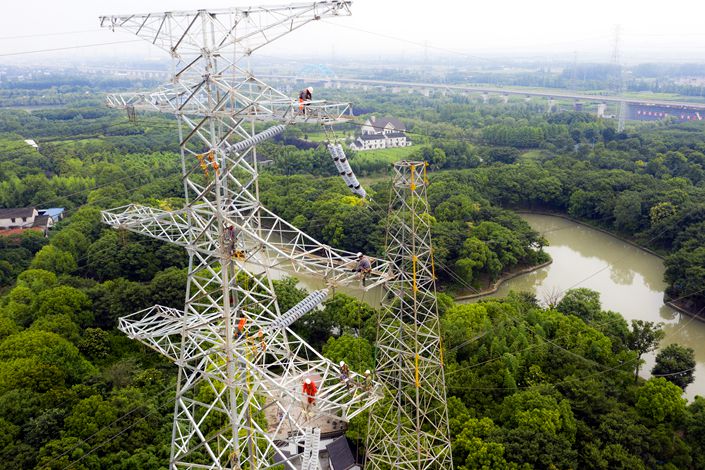 China’s spending on electric power infrastructure rose strongly in the first half of the year, with wind power recording triple-digit growth to make up a quarter of all investment as the nation continued its drive to get more power from cleaner, renewable sources.

Total investment in the power sector, which includes both generation and transmission projects, reached 339.5 billion yuan ($48.5 billion) between January and June, up 21.6% from the same period a year earlier, the China Electricity Council said in its mid-year report released Wednesday.

The strong growth was part of Beijing’s broader effort to boost domestic consumption, said council President Yu Chongde, especially as exports slowed with the spread of the Covid-19 pandemic outside China. He added that “new infrastructure” was a particular focus for the period, as China lays the groundwork for a dawning age that will be anchored by the likes of high-speed telecommunications, smart devices and the internet of things.

Within the two major categories of power generation and power transmission, investment in projects involving the former rose 51.5% to 173.8 billion yuan in first six months, according to the council. Much of those gains came from wind power investment, which rose more than 150% and accounted for about half of the total in generation projects.

Yu pointed out that the renewable energy surge was driven by government incentives and a general push among power producers to get more of their power from such sources. Despite delays to infrastructure investment in other sectors caused by the virus, new energy producers were more likely to keep their projects on schedule during the period to avoid losing subsidies and other incentives for missing deadlines, he said.

In the other major category involving power grid-related projects, investment was roughly flat in the first half of the year, rising just 0.7% year-on-year to 165.7 billion yuan. Such investment actually tumbled 27.4% year-on-year in the first quarter at the height of China’s outbreak, but bounced back with 13.1% year-on-year growth in the second quarter.

The council forecast power consumption will continue to recover over the rest of the year, predicting 6% year-on-year growth for the final six months of 2020.

In terms of output, hydro and nuclear power posted growth of about 7.2% in the first half, while grid-connected wind power posted the fastest growth rate of 10.9%, the council said. Power generation from fossil fuels, which accounts for nearly three times more than the other three categories combined, rose a more modest 1.6%, reflecting Beijing’s determination to wean the country off dirtier fuel sources like coal and move more strongly into renewables.