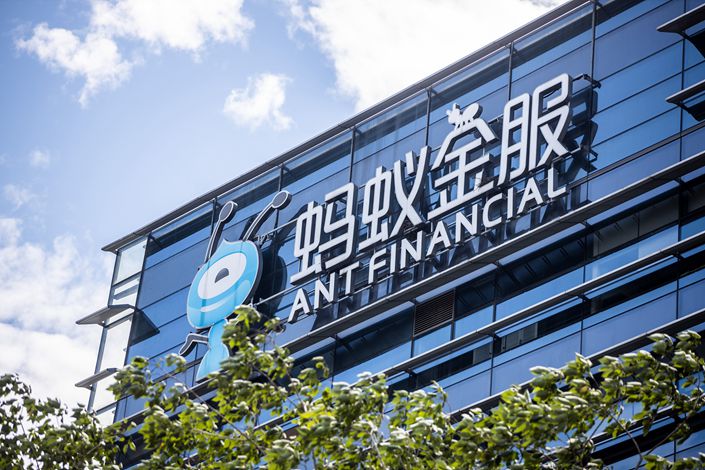 Financial giant Ant Group is looking to raise around $30 billion in its highly anticipated concurrent IPO in Hong Kong and Shanghai, sources with knowledge of the matter told Caixin.

If all goes to plan, the listing would be the largest ever, surpassing even Saudi Arabian oil giant Saudi Aramco’s $29.4 billion IPO about half a year ago.

Based on a valuation of some $200 billion, Ant Group plans to sell 10% of its shares in Shanghai and another 5% in Hong Kong for a combined $30 billion, the sources said.

“The plan hasn’t been finalized,” a person close to Ant Group’s IPO underwriters said. “The company is still in discussions with the Shanghai and Hong Kong stock exchanges, as well as regulators.”

“(The IPO process) will surely be fast,” the person said. “The offering will probably take place in September or October.”

Formerly known as Ant Financial, the financial affiliate of New York- and Hong Kong-listed e-commerce behemoth Alibaba Group Holding Ltd. grew substantially on the back of payment platform Alipay, one of the two biggest digital wallet services in China, which claims to have 1.3 billion users worldwide.

Over the years, Ant Group has leveraged its huge customer base to boost revenue and profits, with businesses expanding into almost every type of financial service, as well as consumer and technology services.

In 2015, Ant Group’s valuation stood at $45 billion during its Series A financing round, analysts at securities company Citic Securities Co. Ltd. said in a February report (link in Chinese), citing Bloomberg data. Three years later, the figure had more than tripled to $150 billion in its Series C financing round.

Eric Jing, Ant Group’s executive chairman, attributed (link in Chinese) the company’s popularity among investors to its advantages in financial technology, achievements in internationalization, and the potential of inclusive finance across the globe.

“The company’s value stems from growth potential,” the Citic analysts said. According to their estimates, Ant Group’s pretax profit grew steadily from 2015 to 2017 before slumping to 1.4 billion yuan ($200.7 million) in the fiscal year ended March 2019, which was due chiefly to rising research and development costs as well as regulatory compliance. In the second and third quarters of 2019, its combined pretax profit picked up to 10.2 billion yuan.

Ant Group’s listing has been highly sought by stock exchanges. Both the Shanghai and Shenzhen bourses reached out to the company a while ago, people with knowledge told Caixin.

Ant Group chose Shanghai’s STAR Market because its long-term valuation will likely be higher there than on any other Chinese mainland board, which is the most important thing for shareholders, a Beijing-based senior investment banker said.

Last year, China launched the STAR Market with a registration-based IPO system, which is more market-oriented than the approval-based one that the country has long employed. The move aims to improve the mainland’s market appeal to tech companies and to encourage them to list at home rather than overseas.

“Aircraft carrier” companies listing on the mainland is a good thing, as capital will flow from low-quality companies to high-quality ones, a person close to regulators said. When small-cap companies that perform poorly get less and less attention and eventually exit the market, it makes for a virtuous cycle, the person said.