By Tang Ailin and Ingrid Luan 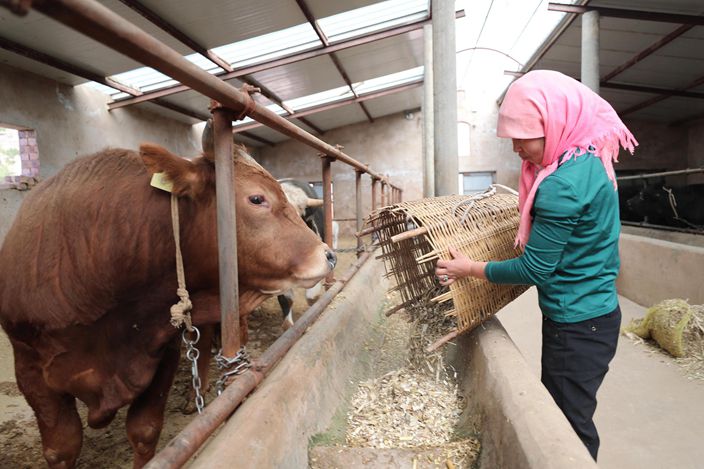 Lawmakers and government advisers have called for China’s first national legislation on poverty alleviation, as Beijing races to meet a self-imposed deadline to eradicate absolute poverty by the end of this year.

The State Council Leading Group Office of Poverty Alleviation and Development plans to study national-level poverty alleviation legislation to deal with relative poverty after completing its goal to eradicate absolute poverty, Caixin was told by a source close to the office speaking on condition of anonymity due to the sensitivity of the issue.

The legislation should be designed to prevent potential return of absolute poverty and set up long-term mechanisms to address relative poverty, experts said. China’s current standard for absolute poverty includes rural residents with an inflation-adjusted annual income below 4,200 yuan ($602).

Li Xiaoyun, an advisor to the State Council's Leading Group Office of Poverty Alleviation and Development, China’s top office for poverty relief, told Caixin in an interview that the legislation is necessary because laws associated with poverty alleviation laws are fragmented.

While China has lifted over 50 million people out of poverty since Beijing vowed in 2016 to end extreme poverty by the end of 2020, there is no national-level legislation on poverty alleviation. Ren Dapeng, professor of rural law at China Agricultural University, and numerous other experts said no law had been passed due in large part to frequent changes in anti-poverty policies and standards. Experts hope that a law could help maintain forward momentum on anti-poverty work after the campaign ends this year.

Li told Caixin that even though absolute poverty could be eliminated in rural China, “relative poverty will still persist in the long run,” referring to the parts of China’s population who have been left behind from the rest and cannot enjoy the same standard of living as others. Li said poverty would be more of a “structural problem” in the future, involving income distribution, employment, and equalization of public services, which cannot be solved with the same technical measures used to address absolute rural poverty.

Ren Dapeng also said a priority for the law is to define “relative poverty,” with criteria that scale with economic growth and social progress. “Relative poverty is measured not only by income, but also by multi-dimensional standards. As a result, the anti-poverty institutional system also needs to be redefined,” Ren said.

Shi Bingrui, head of the Henan provincial office of poverty alleviation and development and a National People’s Congress representative, said in May that the legislation would be a practical necessity to boost post-2020 poverty alleviation work and ensure basic rights for the relatively poor.

Another focus of the conversation is whether poverty alleviation should continue to focus on rural areas. Chinese Premier Li Keqiang told a press conference on May 28 that China still has 600 million people with monthly income below 1,000 yuan. A quarter of them live in cities, according to a survey by the Beijing Normal University, but the campaign to end poverty only applies to those in rural areas, as urbanites cannot be considered absolutely impoverished according to China’s definition of the term.

Li Xiaoyun said the concept of the “rural poor,” which may no longer be applicable, should be replaced by “low-income and disadvantaged groups.” He added that the next step should be to address the relationship between rural, urban and mobile poverty, and that the poverty reduction strategy should address rural-urban inequality.

However, Ren pointed out that the State Council poverty alleviation leading group office has no formal executive or legislative power, so it can only coordinate between different authorities and offer advice rather than enact normative documents, which would make it difficult to tackle such big, structural issues. Ren hopes a poverty alleviation law could clarify the office’s function and further empower it. But Li and Zuo Ting, another advisory committee member and professor in development studies at China Agricultural University, disagreed on the grounds that making it an executive branch could mitigate the office’s ability to mobilize outside resources.

Zuo also disapproved of the proposal for poverty alleviation legislation, arguing that it isn’t strictly necessary and “the key is how to implement existing laws well.”

Wang Sangui, director of the China Anti-Poverty Research Center at Renmin University of China, likewise told Caixin that due to constantly changing standards and objectives of poverty alleviation, it would be difficult to clearly define those concepts and specify legal norms.

But Li Xia, director of Guangdong Baihao Law Firm and another National People’s Congress representative, warned that without timely legislation, it could be difficult to prevent poverty from returning and address future poverty issues.