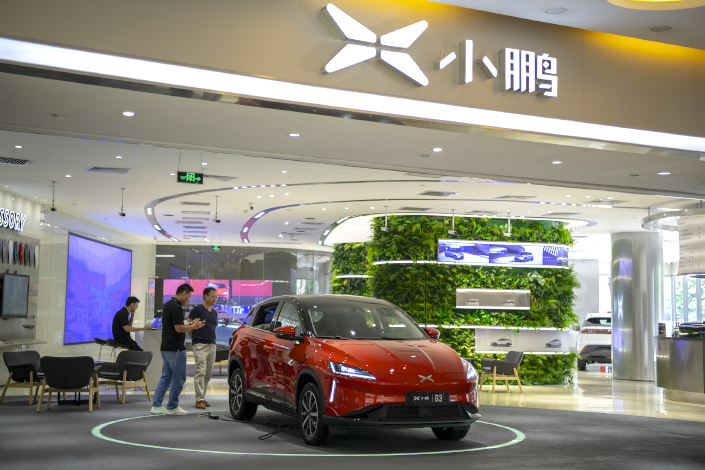 An Xpeng showroom in Guangzhou.

Chinese electric-car maker XPeng Inc. has filed to list on the New York Stock Exchange, about a week after hometown rival Li Auto made a strong debut in on the Nasdaq amid buoyant investor interest in new-energy cars.

In its prospectus filed to the securities regulator on Friday, Xpeng set its fundraising target at $100 million, a placeholder that could still be subject to change.

If Xpeng’s IPO plans go ahead, it will become the third Chinese electric-car company to list in the U.S., following Li Auto Inc. and Nio Inc. which made their U.S. IPOs this July and September 2018, respectively.

Li Auto closed up 43% on its first trading day on July 30. The company raised a total of $1.1 billion, making it the largest share sale by a Chinese company on a U.S. stock exchange since last year.

China became the world’s largest market for electric cars in 2015 after years of effort by the government to promote the industry with generous subsidies. The government handouts created a boom that drew in more than 100 startups. Founded in 2015 by entrepreneur He Xiaopeng, Xpeng is one of few companies to survive the rush into the sector.

More Chinese new-energy car companies are expected to go public in the near future. Hozon New Energy Automobile Co. said last month it wants to list in Shanghai as soon as 2021, and WM Motor Technology Co. is reportedly weighing a domestic IPO in the coming months.

However, amid massive spending on marketing, research, and ramping up production, Xpeng has continued to lose huge sums of money. During the first six months of this year, the company reported losses attributed to ordinary shareholders of 2.1 billion yuan, after losing 4.6 billion in 2019 and 2.3 billion the previous year.

This is common among Xpeng’s domestic peers, with Nio and Li Auto recording net losses of 1.7 billion yuan and 77 million yuan, respectively, in the first quarter this year. After a prolonged period of financial difficulty, Nio recently got a second lease on life following a tie-up with the local government of East China’s Anhui province.

E-commerce giant Alibaba Group Holding Ltd. currently holds a 14.4% stake in Xpeng through its Taobao China unit, according to Xpeng’s prospectus. Alibaba was among the investors that participated in Xpeng’s latest C+ funding round worth $900 million, which closed earlier this month.