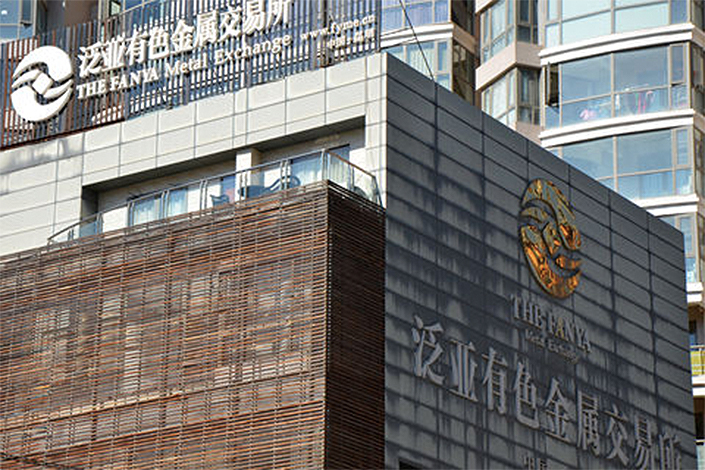 The fallout from the Fanya Metal Exchange scandal continues to reverberate five years after the collapse of the Ponzi scheme that victims claim left 220,000 investors nursing losses of 43 billion yuan ($6.2 billion).

Two former employees of China Merchants Bank Co. Ltd., one of the country’s top commercial banks, were jailed for illegally raising 1.25 billion yuan from investors to buy investment products on the trading platform for nonferrous metals, according to a written verdict (link in Chinese) issued by the Yinchuan Intermediate People’s Court in Northwest China’s Ningxia Hui autonomous region on Aug. 6.

One banker, identified by the surname Dou, received a prison sentence of three and a half years and was fined 300,000 yuan. The other employee, surnamed Xiao, was jailed for three years and fined 200,000 yuan. The two were also ordered to repay investors the total amount they raised illegally, according to the verdict.

Dou and Xiao were employees at a branch of China Merchants Bank in Lanzhou, the capital of the neighboring province of Gansu, according to the verdict. In July 2013, after learning that agents who helped raise funds for Fanya could earn high commissions from the bourse, the two registered a company called Ningxia Fanya in Yinchuan, the capital city of Ningxia, with registered capital of 1.01 million yuan.

Authorized by the exchange, Ningxia Fanya promoted the trading platform’s investment products to investors, guaranteeing them annualized interest rates of 10% to 13%. However, Ningxia Fanya never obtained regulatory approval to operate a financial business.

The Fanya Metal Exchange was set up in Kunming, the capital of Southwest China’s Yunnan province, in 2011 by Shan Jiuliang with the backing of the local authority. The obscure platform for trading rare metals morphed into a Ponzi scheme that sucked in billions of yuan of investors’ money through a wealth management product that offered extraordinarily high annual returns of almost 14% at a time when bank-savings interest rates were less than 4%.

Investors were required to deposit their money with Fanya and then use it to buy products. The mechanism was designed so that the exchange would pocket any returns above the level promised to investors and make up any loss if the price fell below a set limit, one investor told Caixin.

The exchange started restricting withdrawals in April 2015 and stopped withdrawals completely in July, leaving about 220,000 investors facing combined losses of about 43 billion yuan, according to victims of the scheme. The local government’s previous support for the exchange plus its failure to regulate Fanya, investigate its collapse or detain its leaders prompted angry victims to take part in demonstrations demanding justice.

In September 2015, angry investors protested in front of the China Securities Regulatory Commission (CSRC) in Beijing, demanding that the government and police investigate the company.

However, a person close to the regulator told Caixin at the time that the CSRC did not have jurisdiction over commodities exchanges and could only instruct the CSRC branch in Yunnan province to urge local authorities to deal with the matter.

In December 2015, local police in Kunming began to investigate (link in Chinese) the exchange and in March 2019, the Kunming Intermediate People’s Court fined (link in Chinese) Fanya 1 billion yuan for illegal fundraising. Shan, the exchange’s founder, chairman and general manager, was sent to prison for 18 years.