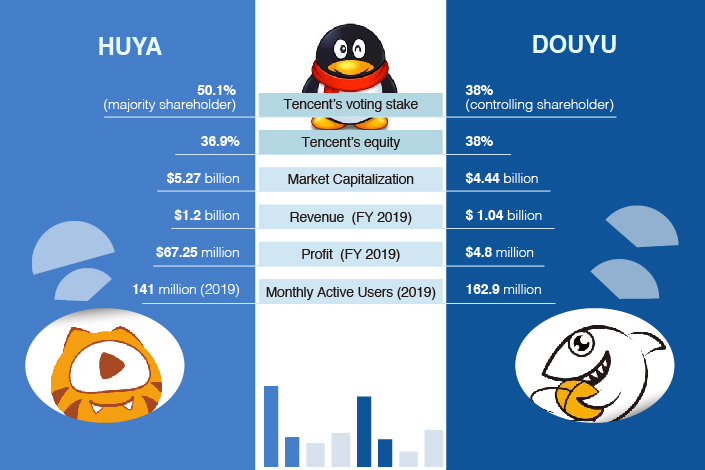 Tencent has gone public with its plan to merge China’s top two livestreaming platforms into an industry dominating $10 billion juggernaut with 300 million users.

In a Monday letter to Huya Inc. and to DouYu International Holdings Ltd., the internet giant proposed a stock-for-stock merger.

Under the plan, Huya would acquire all outstanding DouYu shares via DouYu shareholders, ex-changing their stock for an as-yet undetermined number of newly issued Huya shares.

Both companies released statements Monday saying they were considering the non-binding proposal but that no decisions had been reached. If the companies approve the plan, it may still face hurdles from China’s anti-monopoly watchdog.

Tencent is the largest shareholder of both companies, with a 36.9% stake in New York Stock Ex-change-listed Huya and a 38% holding in Nasdaq-listed DouYu. It has a majority voting stake in Huya, while it’s also DouYu’s controlling shareholder with 38% of voting rights.

Tencent paved the way for this deal in April when it exercised its option to purchase a greater stake in Huya from Joyy Inc. for $262.6 million, which brought its voting rights to 50.1%. Also this week, Joyy announced it had entered an $810 million share transfer agreement with the tech giant, which when completed would bring its total Huya voting rights to over 70%.

Huya, which focuses mostly on video-game streaming, and DouYu, which has a broader variety of content, together have an 80% share of China’s gaming livestreaming market, according to data from MobTech. China’s game-streaming industry is projected to generate 23.6 billion yuan in revenue this year, according to iResearch.

For Tencent, the proposal comes as the relatively similar Huya and DouYu scrap over turf and celebrity livestreamers as new competitors enter the space, including the popular streaming site Bilibili and short-video site Kuaishou.

Kuaishou, which claims its game broadcasts draw 220 million monthly active users, is ramping up recruitment of players, while Bilibili last year beat out other big players to pay $113 million for exclusive broadcastings rights to the League of Legends World Championships.

Tencent has invested heavily in recent years in buying the rights to domestic esports games and events, and has a firm grip on the upstream and downstream markets of the Chinese game broad-casting industry. The game livestreaming business could in future transform into an important distribution channel if cloud and remote gaming become more mainstream, analysts say.

“As the major shareholder of both platforms, Tencent would benefit because a merger would re-move unnecessary competition between them,” Bloomberg Intelligence analyst Vey-Sern Ling said. “The enlarged scale can also help to drive cost synergies and fend off emerging competitors.”

DouYu offered no further comment on the matter when contacted by email. Huya didn’t respond to Caixin's requests for comment.

Bloomberg and Flynn Murphy contributed to this report.